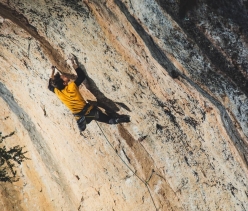 Stefano Ghisolfi making the second ascent of La Capella 9b at Siurana, Spain
Photo by Matteo Pavana / The Vertical Eye

Stefano Ghisolfi repeats La Capella at Siurana, his fourth 9b

At the Spanish crag Siurana Stefano Ghisolfi has pulled off the second ascent of the 9b sports climb La Capella, freed by Adam Ondra in 2011. This is the 24-year-old Italian’s fourth climb of this difficulty.

"It is cool combination of bouldering and sport climbing." This is how Adam Ondra described La Capella to planetmountain.com after having freed the intese line at Siurana in Spain in 2011. The climb has now been repeated by Italy’s Stefano Ghisolfi who, in doing so, has now redpointed his 4th route of these difficulties.

Ghisolfi travelled to Spain towards the end of 2017 with the declared intention of sending another 9b after Lapsus at Andonno, First Round, First Minute at Margalef and One Slap at Arco. He quickly got to work getting a feel for different lines at both Margalef and Siurana and then homed in on La Capella.

Five days were needed just to unlock the crux sequence, and at the start of January a hold broke in the crux making this even more difficult. Ghisolfi’s determination perseverance paid off though and after a further five days he pulled off the long-awaited second ascent.