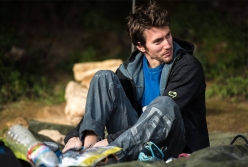 Italian climber Stefano Ghisolfi at Margalef in Spain, shortly before the 4th ascent of 'First Round First Minute' 9b
Photo by Paolo Sartori 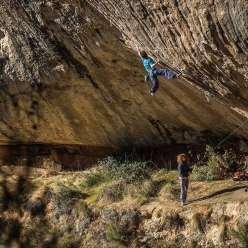 Stefano Ghisolfi making the fourth ascent of 'First Round First Minute' 9b at Margalef in Spain after Chris Sharma, Adam Ondra and Alexander Megos
Photo by Paolo Sartori 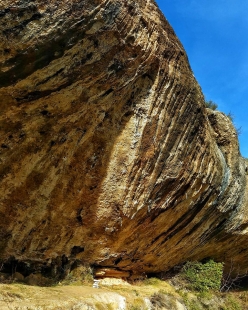 'First Round First Minute' 9b at Margalef in Spain. 25 moves freed in 2011 by Chris Sharma
Photo by Stefano Ghisolfi

Video and interview with Italian climber Stefano Ghisolfi who yesterday, on 30/01/2017, repeated 'First Round, First Minute' at Margalef in Spain. This 9b sport climb was freed by Chris Sharma in 2011 and had been repeated previously by Adam Ondra and Alexander Megos.

Stefano Ghisolfi left the "ring" unharmed. As we reported yesterday, the 23-year-old Italian won his battle against First Round, First Minute, those testing 25 moves through Margalef's steep and sharp conglomerate, first climbed in 2011 by America’s Chris Sharma and linked by only two others, Adam Ondra and Alexander Megos. Ghisolfi made fairly short work of First Round, at 9b considered one of the most difficult sport climbs in the world, especially in view of the fact that currently there are only three 9b+. Success on First Round represents an important step in Ghisolfi’s incessant improvement: it is his first confirmed 9b and second overall, seeing that his Lapsus freed at Andonno in November 2015 still awaits a repeat. Here are Ghisolfi’s thoughts, not even 24 hours after his ascent.

Confirmed 9b, congratulations Stefano! So how are you feeling this morning?
Thank you! I'm dead tired, and I cut my skin on the single finger pocket. Luckily I managed to climb it yesterday, otherwise today would have been a lot harder!

The other day you fell off the last move in the crux. It seemed like the redpoint was a formality
Yes, I’d pretty much done it the other day, but as I moved to the last hold my fingers snapped off the lefthand edge. But the sensations were good and I’d only just missed out on the ascent. I knew I could do it.

But then it started raining. Did you worry you might not get another chance?
I checked the weather forecast constantly and it only rained for one day, so I knew I just had to wait a few days for the climb to dry out. Luckily I still have 15 days here, so I knew that sooner or later I’d be able to try it again.

So those three days off did you good? Out of interest, how much do you rest between one attempt and the next?
Yeah, the enforced rest did me well. In actual fact I trained a bit on my hang board as I was worried I lose some power, but as things turned out I was fine. I usually rest for about 40 minutes, a hour perhaps between one attempt and the next. My best attempt was in the evening of my third day of trying, so I managed to try it without being too tired and every day I fave it about 2 or 3 goes.

You mentioned that conditions were not ideal. How did you feel during the climb and when did you realise that you’d actually clip the chain without falling?
The route was still wet in the morning, so I climbed up it and dried some holds. The tufas were still damp but the boulder crux at the top was dry. It was a bit dirty though so I brushed and cleaned it. It was a fairly humid day and I was worried I’d slip off the easy section at the top… to answer your question, I knew I’d done it only when I actually clipped the chain!

We’re curious: what attempt was it that day? And how much at your limit were you?
I did a lap drying the holds, fell once on the monodoigt and then did it. During the ascent I made a whole bunch of mistakes, I was afraid I’d slip and so I climbed with far more control. It was far from ideal and there was no safety margin. Having said that, given different conditions I think I wouldn’t be at my limit and now that my body has adapted to the route, I reckon I could climb it again, this time much more easily.

Sara Grippo, your girlfriend, accompanied you on this journey, but yesterday you had an equally special belayer...
Sara always belayed me except for yesterday, when she rested and cheered me on while Alexander Megos held my rope. He climbed the route a year ago, and this was the first time he belayed someone on a 9b redpoint!

You like to set yourself goals. Knowing you, you already a new project in mind
Yes, I know what I want to aim for next, but I don’t want to reveal it at this stage. The only thing I’ll say is that it’ll be important, especially from a historical point of view.