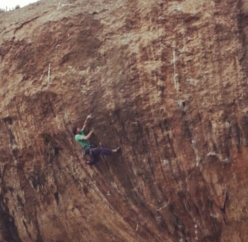 PORTFOLIO / gallery Portfolio: Stefano Ghisolfi doesn't give in to First Round First Minute at Margalef

The video of Stefano Ghisolfi and his most recent attempt at one of the hardest sport climbs in the world, First Round First Minute, Chris Sharma’s 9b at Margalef, Spain.

One move. Just one damn move is all that separated Stefano Ghisolfi the other day from finishing the crux sequence of First Round First Minute, the King Line at Margalef freed by Chris Sharma in 2011. So far this 9b has only been repeated by two other climbers, both sport climbing greats: Adam Ondra in 2014 and Alexander Megos in 2015.

"The climb is beautiful" Ghisolfi told planetmountain.com "the first section up through the slightly overhanging tufts is the most beautiful part, and this is followed by the more painful boulder crux". It’s pouring with rain in Catalonia today, but Ghisolfi has scheduled his next attempt for tomorrow...