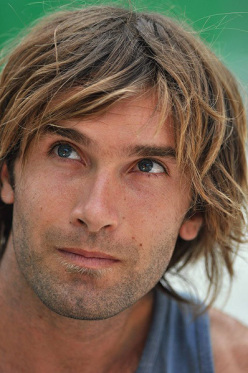 Interview with American climber Chris Sharma after his successful first ascent of First Round, First Minute at Margalef, Spain.

Twenty-five moves separated success from failure. 25 moves through one of the steepest roofs in Margalef which for Chris Sharma had transformed first from early courtship and infatuation into pure love, then painful obsession. Tangible, yet unclimbale. As with many things in life, the only way forward, the only means to progress, was to let go. And yesterday, in a moment of absolute mental freedom, the American climber surprised and surpassed himself by finally linking the line. In this exclusive interview, Sharma shares his fears, joy and, above all, his ability to let go in order to keep holding on.

Wow Chris, what can we say? Finally?!!
Yeah, it's a kind of relief. Sending the route yesterday was something really unexpected.

How come?
On First Round I experienced a real psychological block, I kept failing and I think I fell off the last move more than 50 times. At one point I realised that I just had to let go, that I had to move on if I ever wanted to stand a chance in climbing the route. But after having attempted it for so long, forgetting about the route became a really difficult process.

As did falling off the last move about 50 times...
Yeah, the route is 25 moves long, only twelve, thirteen meters high, so it's pretty short compared to most routes. Although we usually believe that short routes are less demanding psychologically, for me this certainly wasn't the case. I'd done 99% of the route so many times, it was really frustrating and a big learning process at the same time.

You were certain you could do it.
Yes, I knew back in 2009 I had the potential to climb it. But then a feeling crept in that perhaps I might not succeed after all. I was confronted with the feeling of failure, and in the process learnt that this wasn't the most important thing after all.

Had you encountered this psychological block on other routes before?
I think I had it on Biographie. These experiences are interesting, you can learn a lot about yourself, about the psychological battle and although I'd already had this in the past, I found I had to relearn the lesson again.

What is the lesson?
It's all about the difficult task of finding the right balance. When you climb a route at your maximum level you need to want it more than anything else in the world. But at the same time, this desire can keep you from succeeding. So you need to find the balance, let everything go, just climb for the pure joy of climbing, let things flow and try as hard as possible while not being concerned about the outcome.

How did this come about yesterday?
By accident. I hadn't tried it for about two months and yesterday I first climbed in a different sector and suddenly thought "Why not?" Conditions were excellent, no one else was there except for a French couple and what followed was a good, pure moment. Something very special.

If I'm not mistaken, you came close to success a while back...
Yes, once I even managed to climb past the crux, but then I made a stupid mistake and fell. I was worried that I'd missed the window of opportunity, but thankfully I hadn't. I've now got the demon off my back!

Usually when you start a project, you manage to bring it to its logical conclusion
Yes, I've always had faith. This one really beat me though. I'm just glad it's all over.

There's been lots of hype surrounding this route, both positive and negative.
Yes, in some respects this made things even more difficult. Although the route became very public, what remained important for me was that this was definitely a very personal struggle. It is one of the hardest things I've ever done, as well as one of the most rewarding.

Obligatory question: can you fathom a grade?
I've tried the route so often, in all honesty I'd find it really difficult to give it a grade. I think I'd prefer others to try it and help me out.

What now?
I've got a bunch of other routes on the go here in Catalonia and so it'll be great to concentrate on these. But I'll also come to Italy for the Melloblocco, that'll be nice, too!

Chris Sharma: First Round First Minute by Big Up Productions