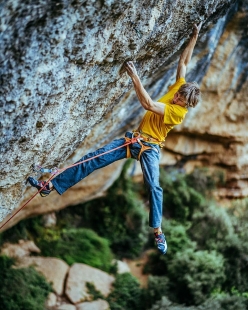 Alexander Megos sticking the crux of Perfecto Mundo 9b+ at Margalef in Spain on 09/05/2018. Bolted by Chris Sharma about 9 years ago, it was described by the American climber as "For me it epitomizes the definition of what a next level sport climb should be. Non stop hard climbing on small pockets and crimps up a beautiful sweeping wall. The crux is this crazy dead point from the shallow flat mono to this amazing pinch (his left hand in the photo). So good!"
Photo by Ken Etzel 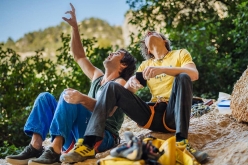 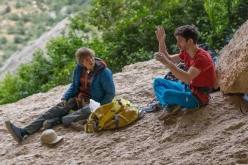 PORTFOLIO / gallery Portfolio: Alexander Megos and Perfecto Mundo at Margalef / The 9b+ interview

Alexander Megos and Perfecto Mundo at Margalef / The 9b+ interview

Interview with Alexander Megos after the first ascent of Perfecto Mundo, the sports climb freed on Wednesday 9 May 2018 at Margalef in Spain graded a staggering 9b+ by the 24-year-old German climber.

On Wednesday 9 May Alexander Megos clipped the chains of Perfecto Mundo, a former Chris Sharma project at Margalef in Spain which, with it’s extremely high grade of 9b+, settles in as one of the hardest sports climbs in the world. If the outrageous difficulties are confirmed, Megos once again is up among the world’s very best; only two other climbers have mastered these difficulties, namely Adam Ondra (who as everyone knows has also climbed 9c) and Chris Sharma.

Prior to his successful ascent the 24-year-old from Erlangen, Germany, worked the route with two undisputed sport climbing aces, Chris Sharma and Stefano Ghisolfi, and together this dream team trio gave life to a cutting-edge “climb session” rarely seen before.

In the past Megos had climbed two full-blown 9b’s, namely First Round, First Minute at Margalef at the end of 2015 and Fightclub in Canada in 2016, to which one needs to add his extreme Frankenjura test piece Supernova. Now, after 15 days of efforts, Megos has come up trumps and in doing so he has taken his own climbing to another level. 15 days, from the man who has got us accustomed to extremely rapid ascents - read the world’s first 9a onsight and the 9a+ Biographie at Ceüse in a single day - provide interesting insight into the wild difficulties of this line in the Racó de la Finestra sector.

Alexander, first of all can you provide some background information about the climb?
Chris Sharma bolted it about nine years ago through the really steep section that contains a host of other really hard climbs. At the time he tried it a bit and also got pretty close to the send. When Adam Ondra started showing interest in his other project, La Dura Dura at Oliana, Chris shifted his focus and they started to work that route together since its a lot easier to try something at your limit with someone else. They both then managed to send Dura Dura and even though Chris wanted to return to Perfecto Mundo, other things always got in his way.

It seems as if interest in this route was rekindled only recently. Stefano Ghisolfi for example started trying it immediately after sending La Capella in January.
Well we’d thought about the route for the last few years and Stefano and I had talked about attempting it together a while ago. When he tried it for two days in January it was simply far too cold.We’d planned to try it together this spring, but when he came in March I was away in the States. I arrived here on the 15th of April specifically with this route in mind, he had other commitments and arrived about 10 days later.

You mentioned that it’s easier to try something hard together
Yes, of course. It’s far more motivating, you push each other and give everything. I can really understand why Chris abandoned the project at the time, it’s really hard to continually try something on your own. It’s just not as exciting as trying something with others.

Is there competition between you?
It’s not a competition, but as I said, you’re really motivated to give your absolute best. And it’s also so much more fun. I had a blast with Chris and Stefano. And of course you’re also far more efficient. When you try something on your own that’s at your absolute limit, you never really know if the sequence you’re trying is the best. You don’t know how hard something really is. So trying Perfecto Mundo with Chris and Stefano was great, we all had our difficulties at different sections of the route and it was cool to understand why and see how we could each improve.

What makes this climb so difficult?
The hard section is about 20 meters long. 45°, with practically no good holds. After the third quickdraw it suddenly becomes really intense. There are about 60 moves, 50 of which are on tiny holds, none of which are good. I’d say the first section is about 8c+ and this leads to 2 slightly better holds where you can shake out. Then comes the crux, about 12 hard moves, followed by the final section which remains hard, on small holds, perhaps an 8b+ in its own right.

Can you estimate how hard the crux is?
Hmm, I’ve never really thought about that. 7C+ circa. Perhaps this doesn’t sound particularly difficult, but you have to consider you’ve climbed about 9a to get to that point, without a decent rest.

That’s the technical lowdown about the moves. But what’s it like to climb them?
Super cool! First of all because there are no really sharp holds, which is quite unusual for Margalef. And also because the route is really complete, after the crux you reach the lip of a burly roof, and this is followed by a technical slab. Things are almost over at this point, but not quite…

You’ve onsighted 9a with Estado Critico at Siurana, climbed Action Direct in 2 hours, Biographie in a day. So how long did this take you?
15 days. That’s quite a lot for me I suppose. During the first two weeks I worked the sequences, and only started trying it from the ground this week. I’d give it a maximum of four attempts each day, usually less due to warm, humid conditions and my skin suffering as a result. On Wednesday I gave it just one try: the send.

How long did that take?
The send? I reckon I needed about two minutes to get to the shakeout, where I then rested for 3, perhaps 5 minutes.

5 minutes at the rest?
Yeah, that’s interesting. When I first started working the route there was no way I could rest there. I’d reach that point and the pump just wouldn’t go away. During the two weeks I slowly learned how to shake out there, that was really important

And then?
Then comes the crux from the mono to the pinch, if things go wrong it’s all over in about 50 seconds. Although I stuck that move a couple of times before, Wednesday was the first time I then did the next two moves. So I then climbed on to below the lip and rested there a bit. Not that I really wanted to, but there was no way I could continue without trying to recover I bit, my arms were just too wasted. And when I finally climbed over the lip I gave myself all the time I needed to do the slab finish.

We know it may sound silly but: were you at your limit?
Bearing in mind that I’d worked the route really well, that I knew it intimately and that I’m not 100% fit I’d say yes, I was really close to my limit. I came to Margalef in the wake of a finger injury, I’d also climbed a bit in the States and had competed in the Boulder World Cup in Switzerland. So my training before coming to Spain wasn’t as specific as it could have been. I know therefore that I can climb harder. 15 days is a lot for my standards, but I know that if I invest more time in a route, I can push things further.

Alex, you were sessioning with Stefano and Chris. Any thoughts?
Chris is really psyched once again, Stefano is incredibly motivated, both are close. Both are capable of climbing it. It’s just a question of time.

Before Perfecto Mundo you’d climbed three 9b’s. In order to raise the bar, why did you choose a new route? Why not repeat an existing 9b+?
Well in some ways it’s easier to make a 9b+ first ascent than a 9b+ repeat. Had I wanted to repeat a 9b+, I’d only have had three options. Adam himself said his route at home isn’t the most beautiful so I excluded that. Change at Flatanger isn’t in condition at the moment and to be honest the climbing in that cave isn’t my preferred style. Which leaves Dura Dura. But if you have the chance to make a really hard first ascent, then that’s really really exciting.

And motivating
Yes. You’re dealing with the unknown. That’s fascinating. And you’re also leaving something for the next generations. Now that’s cool.