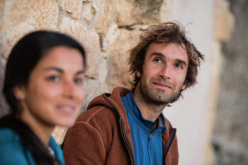 Chris Sharma frees a new 9b at Santa Linya

American climber Chris Sharma has freed Stoking the Fire 9b at Santa Linya in Spain.

"The last couple of years I've been focusing all of my energy trying these in insanely hard projects that I've rarely had the pleasure to actually send a route. Today in Santa Linya was one of those elusive moments... It's nice to remember what that feels like and that I still have it in me!" This is how Chris Sharma sums up his latest experience, his new route at Santa Linya called Stoking the Fire. A "pretty solid 9b" bolted initially by Czech powerhouse Tomaz Mrazek and freed yesterday by the 31-year-old American. And yes, given the quantity and quality of the projects that still await a first ascent (first and foremost the famous Dura Dura at Oliana), it's nice to know that Sharma still has it in him. We never had our doubts!