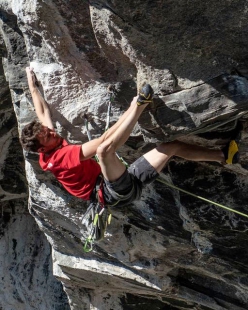 Stefano Ghisolfi repeating Change, the first 9b+ in the world established by Adam Ondra in 2012 at Flatanger in Norway.
Photo by Sara Grippo

Earlier today Stefano Ghisolfi made the second ascent of Change, the first 9b+ sport climb in the world established by Adam Ondra in 2012 at Flatanger in Norway.

He believed in his capabilities to the bitter end. After weeks of attempts, a quick return to Italy to seal his seventh national Lead title, and a lighting trip back to the ultra-steep Flatanger cave in Norway, earlier today Italy’s Stefano Ghisolfi completed the long-awaited first repeat of Change, the first 9b+ in the world freed by Adam Ondra in 2012. 185 moves spread out over 55 nigh-horizontal meters, blasted out to perfection after an extenuating battle that lasted for over an hour, resulted in the redpoint.

Ghisolfi has confirmed the grade Ondra suggested in 2012 and, as such, has brought his 9b+ tally to two, following his repeat of Perfecto Mundo at Margalef in Spain at the end of 2018. Furthermore, Ghisolfi has climbed six 9b’s and his ascent of this coveted testpiece, just when the sending season seemed all over, is further demonstration of his immense talent and unerring perseverance.

Change 9b+ The battle is over, unexpectedly soon, a mental and physical fight that took me more than one month and...