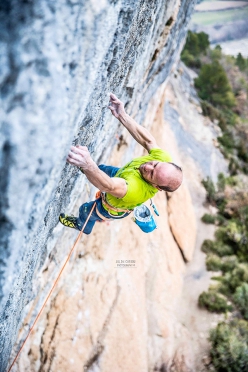 Cédric Lachat repeating Papichulo, the 9a+ at Oliana in Spain established by Chris Sharma in 2009.
Photo by Julia Cassou

Swissman Cédric Lachat has repeated Pachamama, the 9a+ established by Chris Sharma in 2009 at Oliana in Spain.

Cédric Lachat has celebrated his return to Oliana with a fast repeat of Pachamama, one of the reference 9a+ routes at this Spanish venue established in 2009 by local crag master Chris Sharma. The 35-year-old Swiss climber breached this 40m stamina test "faster than expected" and he now has his sights set on a significantly more difficult project, the nearby 9b Mamichula freed in early 2017 by Adam Ondra. This would be Lachat’s first 9b. It contains "two movements are super hard for me but I hear I need to be less lazy and work the routes so I’m gonna spend time here!"

Lachat is extremely versatile and after winning the European Bouldering Championship in 2010 he also turned his attention to difficult multi-pitches, redpointing the likes of Hotel Supramonte in Sardinia, Delicatessen in Bavella, Corsica, Silbergeier in Rätikon, Orbayu on Naranjo de Bulnes in Spain, Zahir at Wenden, Fly in the Lauterbrunnental and Yeah Man in the Gastlosen massif. With a résumé of this calibre, lazy isn’t really the first word that springs to mind.