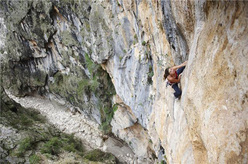 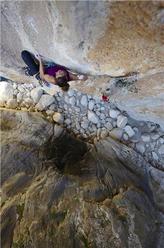 In mid-May Swiss climber Nina Caprez made a rare female ascent of Hotel Supramonte in Sardinia, a few days after an ascent by her boyfriend Cédric Lachat.

Since being established in 1998 by Rolando Larcher and Roberto Vigiani from the ground-up, Hotel Supramonte has fast established itself as being one of the most sought-after multi-pitch sport climbs in the world. The list of those who have been successful on this 400m Sardinian 8b testpiece reads like the Who's who of sport climbing, and includes Adam Ondra with the coveted first on-sight in October 2008, and Martina Cufar with the first female ascent four years earlier.

In July 2009 24-year-old Nina sent two other hard multi-pitches, La Ramirole (150m 8b) and Ultime démence (150m 8a+) on the Rive Gauche in the Verdon Gorge but Hotel Supramonte, being over twice as high, posed a different challenge.


Hotel Supramonte by Nina Caprez
My first visit to this unbelievable multi-pitch route was in April as my partner Cédric Lachat and I decided on the spur of the moment to drive to Sardinia, Italy, to climb this famous route.

On the first day, Cédric tried to on-sight the route, unfortunately though he fell on the last 8b pitch. I had the chance to top rope the route to get an idea of its difficulties. On the second day I then checked out the first five hardest pitches again.

After a rest day I planned to give it a first go. Unfortunately it started raining during our rest day and since it continued to pour for several days we had to leave Hotel Supramonte undone.

I was so stoked about this route that I convinced Cédric three weeks later to drive back to Sardegna to give it another try. This time round we planned enough time for the trip. Cedric tried it on the first day and probably had the fight of his life. Two days previoulsy he had been competing in the Bouldering World Cup where he placed 4th. His arms where still pretty pumped and he had to grit his teeth and give it everything he had. I followed him to get used to the route again.

After two rest days I gave it another try on lead and I finally made it! I had perfect conditions on my attempt - even climbing with glasses as I had lost my contact lenses the day before - and it felt absolutely great. I had a small bumbler at the end of the 4th pitch which meant I had to lower back down to the belay, pull the rope, and reclimb it. The hardest part was the last 7b+, I was so out of power but that's the way it is on multi-pitch routes. The top remains way above you.

This proved to be such an exciting experience for me, despite thinking that I'd never be able to send it. But somehow I managed to get it done as I really wanted this route on my list of climbs. Hotel Supramonte - a must for all sports climbers who enjoy some air beneath them ;).