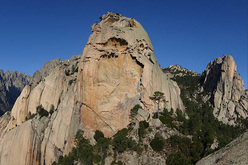 The magnificent Punta d’u Corbu at Col de la Bavella, Corsica. Délicatessen takes a line up the center of the wall, just to the left of the obvious enormous flake.
Photo by Stéphanie Bodet 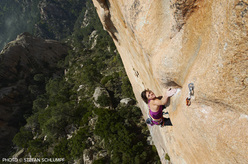 Cédric Lachat and Nina Caprez have carried out the first and second repeat of Delicatessen at Punta d’u Corbu at Col de la Bavella, Corsica. The 120m high 8b was established by Arnaud Petit and Stéphane Husson in 1992 and freed by Arnaud in 2001.

One of the most beautiful multi-pitches in France, and possibly further afield too, has finally received its first and second repeat after being established almost two decades ago. The route in question, Delicatessen, is located in the magnificent granite Bavella mountain range in the heart of the island of Corsica and was first ascended by Frenchmen Arnaud Petit and Stéphane Husson in 1992. The 120m high route with difficulties up to 8b was finally repeated the other day by Swissman Cédric Lachat and, a day later, his partner Nina Caprez after having abandoned a first attempt a few weeks ago due to terrible weather.

After her ascent Caprez commented "I have to admit that 'Delicatessen' is the most beautiful and aesthetic line I've climbed so far." Words like these are worth listening to, especially since over the last few years Caprez has amassed an impressive list of multi-pitch repeats which include Hotel Supramonte (8b, 400m) in the Gola di Gorropu, Sardinia and Ali Baba (8a+, 240m) up the West Face of Aiglun. While Caprez recently made headline news for her swift repeat of routes up to 8c in Oliana Spain and the second female ascent of the magnificent 60m tufa Tom et je ris 8b+ in the Verdon, her sights are now firmly set on other iconic multi-pitches. Beat Kammerlander's famous Silbergeier in the Rätikon is up next, time and weather permitting...

As mentioned, Delicatessen was established by young Arnaud Petit and Stéphane Husson 19 years ago and at the time the duo opted to forge a line up "what is certainly the most beautiful granite rock face"  they know ground-up and with the use of aid. Petit explains: "In 1992 we had little experience at establishing new routes and we couldn't on-sight harder that 7c+, which generally meant that we couldn't equip a pitch adequately if it was harder that 7b+, but nevertheless we attempted the route ground-up. We needed numerous days to climb six short pitches and, apart from some sections on pitch 3, the route was estabilished using aid, climbing from one bolt to the next. The difficulties were such that we simply couldn't do anything else."

A decade after the first free ascent Petit travelled to Corsica and carried out the first free ascent, while this spring he returned together with Stéphanie Bodet to replace the original bolts and now the route now breaks down into 5 pitches instead of the original 6. Given its difficulties it is unlikely to receive multiple ascents on the same day in the near future, but it would be a crying shame if the route lay dormant for another 10 years!