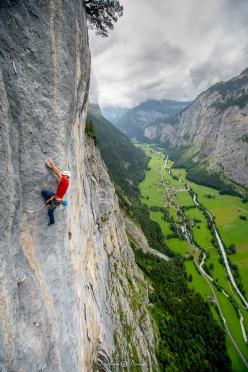 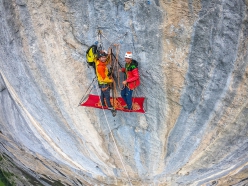 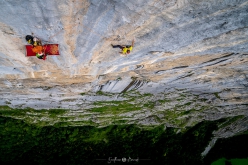 Swissman Cédric Lachat, climbing with Tobias Suter, has made the first repeat and first one day ascent of Fly, the difficult multi-pitch climb in Lauterbrunnental, Switzerland.

The ascent dates back to mid-August, now though there’s this clip documenting Cédric Lachat and Tobias Suter making the first repeat of Fly up Staldeflue in Switzerland’s splendid Lauterbrunnental.

Established between 2006 and 2009 ground-up by Roger Schäli with Michel Pitelka, Markus Iff, Bernd Rathmayr, Mäx Grossman and Stephan Eder, this 20-pitch outing was freed in June 2014 by Alexander Megos over a 4 day period. After 3 bivouacs with Schaeli, Frank Kretschmann and David Hefti, the young German then freed the final two pitches, an 8c roof followed by technical 8b+ face climbing. With these characteristics Fly checked in as one of the most difficult multi-pitch climbs the world.

Although planning on a two-day ascent, Lachat and Suter made swift progress and much to his own surprise Lachat pulled off not only the first repeat, but also the first single day ascent. Recently Lachat made swift work of Yeah Man up Gastlosen in Switzerland, while in the past he has climbed calibre multi-pitch outings such as Orbayo on Naranjo de Bulnes (Spain), Silbergeier in Rätikon (Switzerland), Delicatessen in Bavella (Corsica) and Hotel Supramonte (Sardinia).