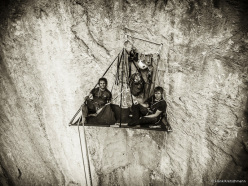 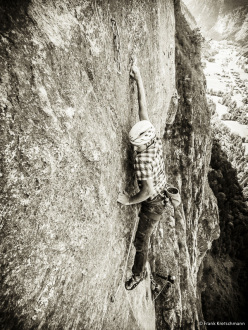 Alexander Megos, we're always reporting about him lately. But this time not because of another astounding sub 2-hour ascent in the Frankenjura, but because he’s spent 4 days on what for him is completely new terrain, namely on a long multi-pitch climb. On the Staldeflue in Switzerland's Lauterbrunnental to be precise, a face known above all by BASE jumpers where, between 2006 and 2009, Switzerland's Roger Schäli established, together with Michel Pitelka, Markus Iff, Bernd Rathmayr, Mäx Grossman and Stephan Eder, the aptly named and extremely difficult Fly. The hallmark of these 550m: after a long series of 7b and 7c comes the crux finish, an 8b, an 8b+ and an 8c pitch that Schäli, despite valiant efforts, had failed to free.

Schäli's ascent of the route was commendable: ground-up, following a smooth, weaving line that too little natural pro, forcing the Swissman to constantly place the bolts off bad hooks. It was he who who invited young Megos to attempt the route together and the duo quickly teamed up with Frank Kretschmann and David Hefti. The four set off on 4 June and, climbing big wall style, needed 4 days (and 3 nights spent in the portaledge after pitch 9) to free all the pitches.

Megos led all pitches, either onsight or flash using the beta given to him by Schäli, except for the 8th pitch (7c), the 17th (8b), the 19th (8c) and the 20th (8b+) that all needed some cleaning before being sent second go. It's worth pointing out that both Schäli and Hefti led all pitches free except for the 3 hardest, and that pitches 7 and 8 were wet initially and therefore redpointed on day 4. This means that to complete the work, what is missing is the logical ascent of all pitches in the correct order. And obviously the first one-day ascent, if this is at all possible.

But apart from these – albeit important – details, the ascent of Megos is truly extraordinary and makes Fly one of the most difficult multi-pitches in the world. Almost as intense - remaining in the Alps - as Wogü in the Rätikon massif (established by Beat Kammerlander and freed by Adam Ondra with the following difficulties: 8c, 7c+, 8b+/8c, 8b, 8b+, 8a+, 7c+) or as Solo per vecchi guerrieri put up by Manolo in the Dolomites, but far longer. It’s worth noting that Schäli's believes his route is the easiest line up the face. With a mere 10 minute walk-in to add to the fun, it'll be interesting to see what the future holds.