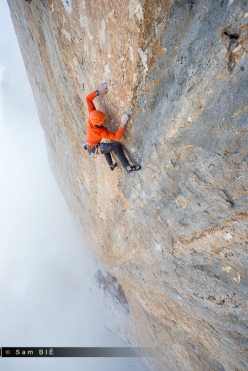 Lachat travelled to the Spanish National Park at the end of June together with his partner Nina Caprez who also had her sights on this line. After having worked the moves and, in particular, after having battled against the fickle conditions, Lachat and Caprez set off at 6:00am last Wednesday - the only true day of sunshine - for the redpoint.

Lachat led throughout the 500m line aand all pitches were climbed first go except the first and second that both needed a second attempt due to the intense cold freezing Lachat's fingers. The duo reached the summit 12 hours later, during which a fair amount of time was spent documenting the ascent. This is only the third repeat, after those of Nicolas Favresse and Adam Pustelnik in summer 2011.

The route is protected with a mix of gear from pegs to bolts and Lacaht stated: "I believe you need a certain amount of experience on this sort of terrain to protect yourself and avoid putting yourself in danger.A fall from the wrong point, or ger place badly, could result in a 20m ground-fall."

It's worth noting that Caprez seconded all pitches without falls, except for the crux 8c pitch, which indicates that she stands a good chance of repeating the route. Currently the weather is poor but the couple will return on Saturday for a fortnight in the hope that conditions will improve significantly.


05/06/2009 - Picos de Europa rock climbing in Spain
The mysterious place that everyone seems to have heard about, but where not many have dared venture! Under-rated and often overlooked, the Picos de Europa is Northern Spain’s hidden secret! Consisting of a huge area of wild limestone peaks, it offers rock climbers and mountaineers a wealth of routes in a range of styles, sizes and difficulties.