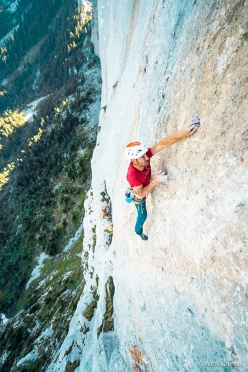 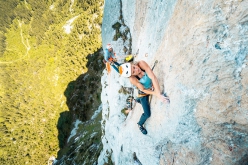 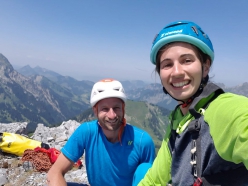 Cédric Lachat and Caroline Minvielle after having climbed Yeah Man, 8b+ multi-pitch up Gran Pfad, Gastlosen, in Switzerland
Photo by Mathis Dumas 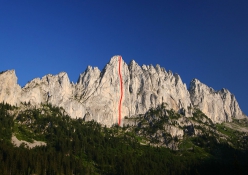 The line of Yeah Man, 8b+ multi-pitch up Gran Pfad, Gastlosen, in Switzerland
Photo by Mathis Dumas

Swiss climber Cédric Lachat has started his summer tour on some of the hardest rock climbs in the Alps by repeating Yeah Man, a 300-meter route up the north face of Gran Pfad in the Gastlosen mountain range in Switzerland.

Established by the Swiss mountain guides Francoise Studemann and Guy Scherrer, these nine pitches were freed individually by Josune Bereziartu and Rikar Otegi in 2004 who, due to bad weather, didn’t get a chance at making the first free ascent in a single day. This was one on 1 August 2010 by the late Giovanni Quirici.

Lachat worked Yeah Man for two days together with French climber Mélissa Le Nevé then on Sunday 30 June, accompanied by Caroline Minvielle, made his successful repeat. He described the line as "one of the most beautiful routes I've ever climbed. And also one of the most difficult."

In the past Lachat has climbed calibre multi-pitch outings such as Orbayo on Naranjo de Bulnes (Spain), Silbergeier in Rätikon (Switzerland), Delicatessen in Bavella (Corsica) and Hotel Supramonte (Sardinia). His sights are now set on repeating Odyssee up the Eiger with Tobias Suter, conditions permitting.

24.05.2011
Delicatessen, first repeat in Corsica's Bavella after 10 years by Nina Caprez, Cédric Lachat
Cédric Lachat and Nina Caprez have carried out the first and second repeat of Delicatessen at Punta d’u Corbu at Col de la Bavella, Corsica. The 120m high 8b was established by Arnaud Petit and Stéphane Husson in 1992 and freed by Arnaud in 2001.