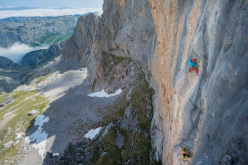 Orbayu, the climbing Odyssey with Nina Caprez and Cédric Lachat

On 9 July 2014 Switzerland's Cedric Lachat repeated Orbayu, the 500m 8c freed on Naranjo de Bulnes by Iker Pou and his brother Eneko in August 2009. During the same period Nina Caprez attempted to repeat the same route, renowned for being as tough mentally as it is physical. Caprez however still has some unfinished business in the Picos de Europa massif: while she managed to send each pitch individually, a single-push, one day ascent is still outstanding.

05/06/2009 - Picos de Europa rock climbing in Spain
The mysterious place that everyone seems to have heard about, but where not many have dared venture! Under-rated and often overlooked, the Picos de Europa is Northern Spain’s hidden secret! Consisting of a huge area of wild limestone peaks, it offers rock climbers and mountaineers a wealth of routes in a range of styles, sizes and difficulties.