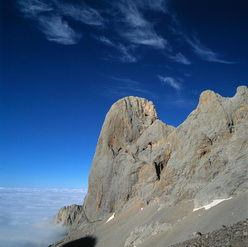 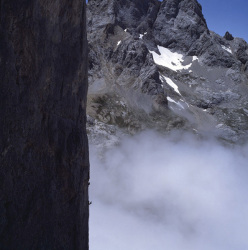 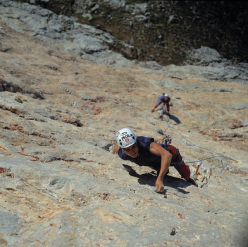 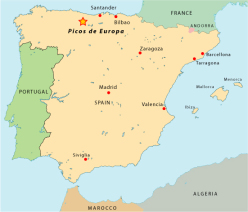 The mysterious place that everyone seems to have heard about, but where not many have dared venture! Under-rated and often overlooked, the Picos de Europa is Northern Spain's hidden secret! Consisting of a huge area of wild limestone peaks, it offers rock climbers and mountaineers a wealth of routes in a range of styles, sizes and difficulties.

The mysterious place that everyone seems to have heard about, but where not many have dared venture! Under-rated and often overlooked, the Picos de Europa is Northern Spain's hidden secret! Consisting of a huge area of wild limestone peaks, it offers rock climbers and mountaineers a wealth of routes in a range of styles, sizes and difficulties.

Despite its rich history of climbing and being home to Spain's most famous mountain (Naranjo de Bulnes), the area is almost unknown outside of Spain. So, if climbing on good rock in an un-crowded area appeals to you, then maybe you should go and investigate for yourself before it becomes too popular!

The classic climbs of the area are situated on the imposing tower of Naranjo de Bulnes. The routes here are multi-pitch with a mixture of bolted and trad climbing. There are routes on each of the four faces with grades ranging from about HS (4b) to the very, very hard. Well equipped abseil stations also make for relatively stress free descents. And this is just one peak in a whole range of mountains! But it's not all about long mountain routes, huts and hardship - outside of the main mountain chain, there are single pitch sports crags, with plenty of routes from 4a - 8 for those who prefer something a little less committing.

Getting to the Picos de Europa is remarkably simple and can be accessed by car, plane or ferry. Santander or Bilbao are the closest major cities and can be accessed by all three modes of transport. They are under two hours drive from the Picos - depending on your chosen objectives, you can head to the relevant side of the national park from there.

Food and Accomodation
There are a number of convenient ?Valley Bases' that have the usual campsites, guest houses and hotels. Popularly known as, ?the gate way to the Picos', Arenas de Cabrales is one of the main starting points for heading up to Naranjo de Bulnes from the north end of the national park. Further south, the town of Potes is a much busier tourist town, due to the cable car at Fuente De. Here there are plenty of campsites, chalets and hotels to choose from, and of course, the attraction of using the cable car to save your legs having to walk in as far!

There are several well placed Mountain Huts that service the different areas of the Picos. They range in size and quality, with bed spaces ranging from 4 to 100 places. Wild camping is permitted in most areas, but only between sundown and sunrise. The only problem with camping is that there are not many water sources in the mountains.

Climbing
If staying up at mountain huts and climbing multi-pitch routes is your thing, then you'll easily be pleased with the choices, but the area also contains superb, single pitch venues and many of the big routes can be done in a day from the valley. There are far too many climbs to even begin recommending a classic ?must-do' routes list, but hopefully this introduction will give you an idea of what's available out there. As a bonus to those on a tight schedule the relatively low altitude negates any altitude problems associated with going to the Alps.

Location: Northern Spain, Asturias
Best time of year: Although this is Spain there does seem to be a different climate in the Picos de Europa National Park. The best time of the year to go is July and August. Earlier in the year the weather is not as stable and in some areas there may still be snow.
Gear: 10 quickdraws for single pitch crags, full rack & double ropes for mountain routes.
Beauty: *****
Height: 15m - 700m
Grade: 4a ? 8c
Number of routes: 1000s
Bibliography: The most up to date guidebook (in English) is an e-book download from climbpicosdeeuropa.com. Cicerone have a guidebook that has been regularly reprinted, but the content has remained the same since 1989, so it is well worth getting the update! If you are able to read Spanish, then ?Cordillera Cantabrica ? Escaladas Selectas en Roca? by M.A. Adrados is the best. Even if you don't speak Spanish, this has some good colour topos, to help you out!
Links: www.guiasdelpicu.com