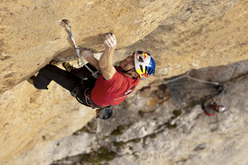 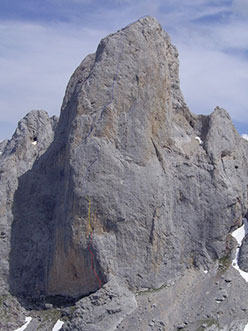 The west face of Picu Urriellu, more commonly referred to as Naranjo de Bulnes in the Picos de Europa massif in Spain, and the line of Orbayu (8c+/9a 510m) put up by Iker Pou and Eneko Pou in August 2009
Photo by Iker Pou 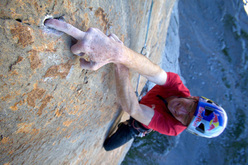 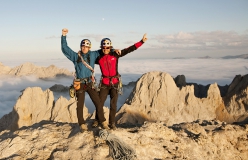 In August 2009 the Spanish brothers Eneko and Iker Pou carried out the first ascent of Orbayu 8c+/9a, 510m Naranjo de Bulnes, Picos de Europa, Spain which they describe as their most important route ever.

"This is the most important route we've ever climbed. We worked it for two whole months this summer and it can be broken down into three sections. The first four pitches are new and very steep and were first ascended with a Rätikon and Wendenstöcke mentality, which means long run-outs from one bolt to the other! The second section shares six pitches of an old route called Mediterraneo, first climbed in 1980 using aid. The 5th pitch is the technical crux at 8c+/9a and although it is a bit easier, it is still 8a+. Both were originally climbed using aid and graded A3, and we risked big falls between 20 -25m. The protection on these pitches was very old, there were some original bolts, but most of the rest are wooden pitons, copperheads, micro-friends and nuts..." These are the reassuning words Iker Pou uses to describe Orbayu, his latest creation up the West Face of El Naranjo de Bulnes in Spain's Picos de Europa, recently climbed free in a single push together with his brother Eneko.

The two Spaniards are no newcomers to hard routes (in 2000 for example Iker made the third ascent of Wolfgang Güllich's Action Direct) and the two have now suggested a stagging 8c/9a for this 13 pitch monster. They first checked it out in summer 2008 and believed it unclimbale, but the seed of doubt and desire was sown and they returned this June for their two month stint. Progress was often hampered by the typical Asturian drizzle, to which the route now owes its name: "We called it Orbayu because, although we are from the Basque Country, the Asturias is like our second home. We have been climbing in this area for years and we have a special relationship with this land. We hope this route will help increase the international reputation of the Naranjo de Bulnes as a climbing mecca. For us it is on a par with the big walls in Yosemite and Patagonia."

Without a doubt this route ranks high as one of the hardest multi-pitch routes in the world, but there are simply too many variables and styles of ascent that come into play on routes like these to create a definitive list. Having said that, some of the hardest bolt creations in recent years include Solo per vecchi Guerrieri in the Italian Dolomites (8c/9a, 150m, Maurizio "Manolo" Zanolla 2006, ground-up first ascent), Wogü in Switzerland's Rätikon (Adam Ondra, 8c, 230m, 2008, first bolted from the ground up by Beat Kammerlander in 1997), Pan Aroma on the Tre Cime di Lavaredo (8c, 500m Alexander Huber, 2007) and Bellavista (8c, 500m Alexander Huber, 2001).