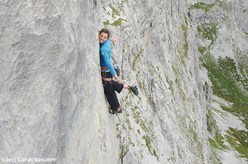 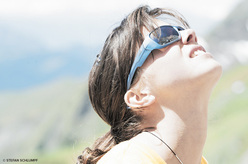 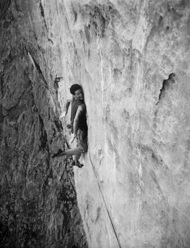 Interview with Nina Caprez after the Swiss climber carried out the first female ascent of Silbergeier, shortly after her partner Cedric Lachat repeated the 240m 8b/8b+ in the Rätikon, Switzerland.

Some routes are icons. Silbergeier is one of these. Established by Austrian Beat Kammerlander on the IV Kirchlispitze in Switzerland's Rätikon mountain range in 1993 and freed a year later, Silbergeier immediately became a sought-after testpiece. The 6 pitch vertical line attracted the world's best, not only because of its technical difficulties but also because of its severe climbing and long run-outs, a result of Kammerlanders no-compromise ground-up style.
The list of repeaters reads likes the Who's Who of sport climbing and includes the likes of Peter Schäffler (1997), Stefan Glowacz (1998), Pietro dal Prà (1999) and Harald Berger (2005) to name just a few, to which must be added Adam Ondra who, in 2007, carried out the first one-day ascent. And now, on Saturday 02/07/2011, the route has finally received its first female ascent, at the hands of Nina Caprez. After repeating Delicatessen in Corsica at the start of May the Swiss climber hinted that this was to be her next goal, and although her partner Cedric Lachat recently repeated the line, foul weather hindered her redpoint. That is, until yesterday.


Congratulations Nina!
Thanks! Silbergeier has always been my dream. If you grow up close to the Rätikon like I did, then the route is simply an landmark climb. Ever since I started climbing I've had that poster of Pietro dal Prà stuck in my room and I simply knew that one day I'd want to climb the route!

How was the first approach?
The first time on the route, bouldering out all the moves, was extremely difficult! Without in-situ quickdraws and not even the smallest tickmarks made it very difficult to get up the line because it's fairly run-out. You need lots of patience, sensitivity, good shoes and a lot of skin to find the right beta. The 8b+ pitch at the top is brutally difficult, with the smallest of footholds and razir-sharp holds. Your body position needs to be perfect, otherwise you just can't do the moves.

The route is high up in the Swiss Alps
Yes, and the weather is an important factor... twice it really messed things up. The weather forecast had been good, but then I ended up sitting in the fog, or it started raining of snowing... If not, if can easily get too hot, because the route faces south and receives the sun all day... so you've got to to strike it lucky and get the right day! Last week I climbed all the hard pitches and then on the last 7c+ it stated raining and it was simply impossible to climb this sopping wet pitch! I was sooo close, but there was nothing going.

You've been specialising in hard multi-pitches
The only route I can compare it with is Délicatessen, because this too is vertical and fairly slabby. But Silbergeier is 10 times harder, the overall effort needed to approach and send the line is immense and it's psychologically very demanding since the bolts are very run-out. On some sections you simply cannot fall... it's Rätikonstyle!

What next?
I want to change the style of climbing completely now. Something overhanging, with large tufas, or a bit of bouldering. Silbergeier really took everything away from me. Now I'm off to Canada for a fortnight and that'll do my my feet and above all my spirit good!

And then more big walls...
Yes, absolutely. Next spring I'd like to travel to Morocco. And then visit Yosemite, I simply have to visit the valley! ;-)