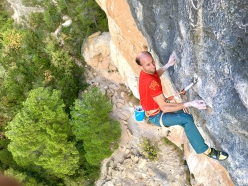 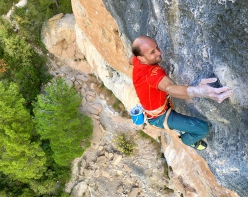 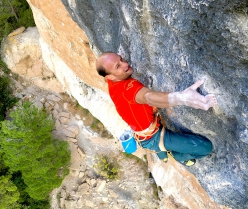 Cédric Lachat has added his name to the list of those who have repeated La Rambla at Siurana, long considered the hardest climb in Spain and without a shadow of doubt one of the handful of routes that have captured the imagination of the world’s strongest.

First ascended by Alexander Huber in 1994 to the pocket at about 3/4 height, then extended to the top by Ramón Julián Puigblanque in 2003, this benchmark 9a+ had been attempted by Lachat in the past on several occasions, but conditions were never quite right.

Thanks in part to a new crux sequence suggested to him by Dani Andrada, the 35-year-old Swissman has now redpointed his fifth 9a+ after Papichulo at Oliana (2011), Chaxi at Oliana (2013), La cène du lézard at Jansegg (2018) and Sweet neuf at Pierrot Beach.

Last summer Lachat spent his time not on single pitch sports climbs, but up in the Swiss mountains repeating hard alpine outings such as Zahir at Wenden, Fly in the Lauterbrunnental and Yeah Man in the Gastlosen massif.

19.03.2019
Dave Graham rules La Rambla at Siurana
American rock climber Dave Graham has repeated the famous sport climb La Rambla. Gonzalo Larrocha also checks in with a repeat of the benchmark 9a+ at Siurana in Spain.

31.03.2013
Alexander Megos strolls La Rambla 9a+ second go
On 29 March 2013 German climber Alexander Megos redpointed one of the world's reference 9a+, La Rambla at Siurana in Spain, on his second attempt.