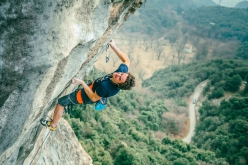 Adam Ondra discovers his 9b Wonderland at Arco, Italy

At the crag Terra Promessa close to Arco, Italy, Adam Ondra has made the first ascent of Wonderland 9b/+

Adam Ondra’s ambition and quest for new climbs knows no limits and the 29-year-old continues to deliver, again and again, at the top of the climbing game. His latest, a mere fortnight after establishing the explosive 9b Bomba at Hotel Olivo, is another 9b, possibly 9b/b+ even. The route is located above Arco, Italy, once again at a crag called Terra Promessa, Promised Land.

The route had been bolted by local hotshot Alfredo Weber, but Ondra added an alternative start and added a few more bolts last autumn and dialed the moves before he fell ill and the route got wet. Making the most of this remarkably dry winter, he has now sent the line, calling it Wonderland.

After the redpoint Ondra stated "I believe it could be the hardest route in Arco at the moment. The route fits my style, it is quite morphological (harder if you are short), but if it could break the barrier into the 9b+ realm?  I honestly do not know. It is also really difficult for me to tell what could be compared with La Dura Dura, Change or Perfecto Mundo. All I know is that it felt a little bit harder than Erebor that I did a few months ago."