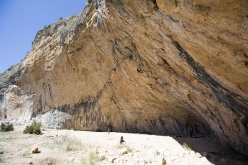 The crag Santa Linya in Spain
Photo by PlanetMountain.com

Sport climbing in Spain: at Santa Linya Adam Ondra has repeated Neanderthal, a 9b sports climb first ascended by Chris Sharma in 2009

Is a 9b climbed by Adam Ondra still newsworthy? Even if in some respects the Czech climber seems to have a harder time finding one than actually redpointing it? Of course it's big news. Because although Ondra has already redpointed over 20 climbs of these inordinate difficulties, including three 9b+ and Silence, the world’s only 9c, at present there are less than a handful of climbers worldwide capable of sending 9b. So a 9b sent by Ondra, or for anyone else for that matter, is, yes, very much headline news.

During a brief visit to Santa Linya in Spain Ondra has now managed to repeat Neanderthal, the marathon outing established by Chris Sharma and recently in our news thanks to Jakob Schubert who claimed the first repeat. Ondra started trying the route in 2011 and now congratulates Sharma for his first ascent that dates back to 2009, when the Czech youngster was a mere 16 and although the rising star, hadn’t yet climbed 9b. Much has obviously changed during these nine years, but one thing is certain: 9b is still absolutely world class, and definitely headline news.

Neanderthal 9b, Santa Linya There are not many routes that I can tell about that I really hated then at certain point. But Nenderthal was definitely one of them. Not because the route is of bad quality, just because how many times I failed again and again. Getting over it and finally suceeding was a huge lesson. 2011 - tried one day, made it to the dyno 2nd go, next day it got wet. 2015 - tried for like a week, and found out I just could not the dyno from the ground. It felt too had with two fingers in the pocket, and I had no idea how to squeeze my 3 fat fingers in. 2017 - I found better kneebars, figured out how to squeeze my fat fingers into the pocket and stuck the dyno on day one of the trip!! Only to fall off from the nohand-rest above because a foothold broke. Then, I tried for 5 more days, but never had good conditions or I was just too weak. Second trip of that year I got sick. 2019 - Short trip and second-last day of the trip I stuck the dyno and fell higher again, due to brutal flash pump this time. Last day of the trip, first try falling of the dyno again, sun is slowly coming, I need to go fast. Now, or yet another season. It was an epic try, but hell - it felt good to be in the sun at the anchor. Pic by @jan_novak_photography in Santa Linya, but a different route. Props to @chris_sharma for making FA of this beast 10 years ago, and @jakob.schubert for the second ascent in December. @montura_official @lasportivagram @mytendon @blackdiamond @gardatrentino

10.02.2019
Adam Ondra and Piotr Schab send 9a+ in Spain
Sport climbing in Spain: Adam Ondra has sent Catxasa at Santa Linya while Piotr Schab has redointed La Rambla in Siurana. Both climbs are graded 9a+.