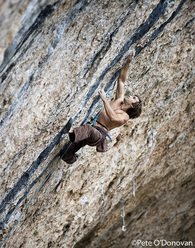 Chris Sharma making the first ascent of Sistema Analogico 9a at Santa Linya in November 2009.
Photo by Pete O'Donovan 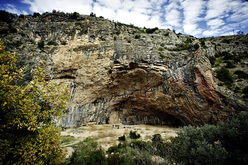 Those who follow sport climbing chronicles know full-well that driving force behind this startling development is spearheaded by none other than the indefatigable Dani Andrada from Spain and Chris Sharma from America. After adding Papichulo" 9a+ to Oliana, Demencia Senil 9a+ to Margalef and Golpe de Estado, a possible 9b to Siurana, the climber from California has now freed another testpiece for the world elite, namely Neanderthal 9b at the wildly steep Santa Linya cave.

The marathon outing runs close to La Novena Enmienda 9a+ (first ascended by Dani Andada in 1995 and recently repeated by Andreas Bindhammer from Germany) and was sent by Sharma last Friday in perfect winter conditions.

Although the presents seem to have arrived early for the young American, FAther Christmas may have more in the bag for super Sharma: Chris now has his sights firmly set on First round first minute, another possible 9b, this time at Margalef. Let's keep our fingers crossed that the mantra continues!