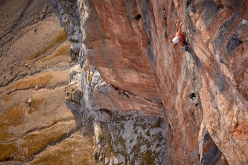 Austria’s Barbara Zangerl has made a rare repeat of the 8b+ multi-pitch climb Sangre de Toro up Rote Wand, Lechquellengebirge, freed by Alex Luger in 2014.

Barbara Zangerl has proven time and time again that she’s completely at home on the hardest big walls out there. The alpine trilogy immediately springs to mind, comprised of Des Kaisers neue Kleider (Wilder Kaiser, Austria) Silbergeier (Rätikon, Switzerland), End of silence (Feuerhorn, Germany), as do Delicatessen (Corsica) Hotel Supramonte (Sardinia), Bellavista (Tre Cime di Lavaredo), Die Unendliche Geschichte (Rätikon), El Nino , Zodiac and Magic Mushroom on El Capitan, (USA) and Odyssee on Eiger. This short list is by no means comprehensive yet indicative of how, when she sets her sights on a project, the redpoint is only a question of time.

On 30 September the Austrian added another difficult multi-pitch to her score, namely the lesser known but equally difficult Sangre de Toro up Rote Wand in the Lechquellengebirge. The six-pitch outing was established established in 2012 ground-up without the use of aid by Alex Luger, Günther Winkel, Robert Natter and Konrad Mathis, then freed two years later by Luger. Jacopo Larcher pulled off the first repeat in 2017, followed by Mark Ammann. Protected with a mix of trad gear, pegs and bolts, Zangerl described this 8b+ as "6 pitches of pure joy and some spicy runouts as well. It's an absolutely superb route, not all too long, but each pitch is an absolute gem, in particular the crux."

04.05.2012
Corsica climbs for Zangerl and Bodet
In Corsica's Bavella Barbara Zangerl has repeated Delicatessen (8b, 120m), while Stéphanie Bodet has repeated Octogénèse (8a+, 300m).