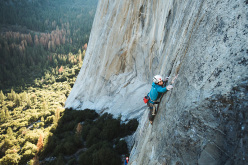 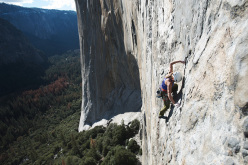 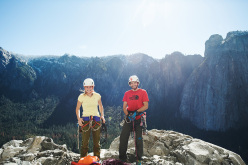 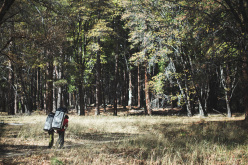 Jacopo Larcher talks about his first climbing trip to Yosemite Valley, USA with Barbara Zangerl, during which they repeated El Nino (5.13c, 800m) on El Capitan and other granite big wall climbs.

This autumn Jacopo Larcher visited Yosemite Valley for the first time. After having sent sport climbs up to 9a and 8B boulder problems, the time was finally ripe to try his hand on some of the most famous big walls in the world. The Italian climber was accompanied by his partner Barbara Zangerl, the strong Austrian who in recent years has specialized in difficult multi-pitches such as Die Unendliche Geschichte in Rätikon, Bellavista on the Tre Cime di Lavaredo in the Dolomites and Des Kaisers neue Kleider in the Wilder Kaiser massif, to name just the latest three. With a background like this one it’s clear that the two had set their goals high and they decided to try their luck on El Niño, the route freed by Alexander Huber and his brother Thomas in 1998 up the southeast face of El Capitan. Jacopo and Barbara spent eight days repeating the 800m line, breaching difficulties up to 5.13c, climbing ground-up, with no fixed ropes, swinging leads. Not bad at all for a first visit, especially if you bear in mind that Zangerl’s might even be the the first repeat female of El Niño.

When you think about huge granite rock faces, the first that 99% of climbers think of is undoubtedly "Yosemite"! It is there that big wall climbing was developed, making "THE Valley” one of the premier destinations for this type of climbing worldwide. Everyone, sooner or later, visits the valley; those who climb its long granite cracks, those who play on the many boulders scattered across the forest, those who come here to trek, those who simply come to enjoy the splendor of El Capitan from the meadows below. In short, Yosemite is a magical place, shrouded in history, a huge playground for all outdoor enthusiasts!

Although I’d always postponed my visit to a later date, I always knew that one day I myself would play on these immense rock faces. All I was waiting for was just the right moment... Babsi had already been there once before, with Hansjörg Auer 5 years ago, and she was itching to go back. Convincing her wasn’t difficult :-)

Despite having climbed for more than 15 years, and having dedicated the last few years to long multi-pitch routes and crack climbing, I still felt quite intimidated by the routes on El Capitan. The stories I’d heard from those who’d been before me, the complicated logistics on the wall and the dreaded off-width cracks me scared me somewhat! So I left Europe without too many expectations; I simply wanted to have fun and gain some big walling experience.

After entering the valley and after having driven through kilometers of forests, Half Dome and the profile of The Nose finally came into view the first thing that sprung to mind was: WOAH !!! -D I was expecting a reaction of this sort, but I hadn’t imagined it all to be quite so impressive! The hundreds of other rock faces, and the thousands of boulders scattered across the forest floor, made it even more inviting. For a moment I felt like a child entering Disneyland for the first time! I immediately understood why this park is so famous. Its nature, rocks, animals, the vast outdoors, its history... are all factors that make this place so magical.

Unfortunately I also discovered that we weren’t the only ones in this never never land: thousands of tourists visit the park every day, making it far less wild than I had initially expected. You can be certain you’ll have to wait your turn in the queue, whether it’s for a cup of coffee, going to the toilet, camping ... or even climbing a route! It took me a while to adapt to this situation but at the end of the day, given the beauty of the valley, it’s not surprising.

The first climbing we did was pretty traumatic. The easier routes, especially the crack climbs, were always a challenge, and the wider they became, the more difficult things got! No matter how strong you are on bolted routes, here it seems as if you're playing a completely different sport :-) You have to start from square one and accept the fact that you’re dealing with a completely different reality. Often you find yourself repeating some historic routes (considered easy by most), wondering how on earth the first ascentionists managed to climb them, so many years ago and without friends, seeing that they hadn’t been invented at the time. In the end we worried more about the 5.9/5.10 chimney and offwidth pitches than 5.13 slabs!

We soon realised that big wall logistics are much more complicated than what we had expected; hauling bags, establishing the portaledge, working out how many supplies you need and dealing with primary "needs"... it's not that simple and getting the hang of things takes a bit of time and humility.

But when you find yourself resting on a portaledge, with almost 800 meters of void below you, or when you finally reach the top of El Cap ... all the hardship is forgotten about and this gives way to pure joy. And the desire to start all over again!