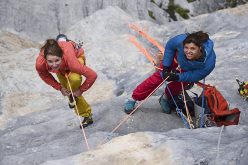 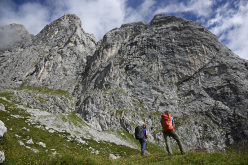 Both Nina Caprez and Barbara Zangerl have repeated Die Unendliche Geschichte, first climbed by Beat Kammerlander in 1990 in the Rätikon massif, Switzerland. 420m high and graded 8b+, this climb had previously only been repeated once, by Italy's Pietro dal Prà in 2005.

Two of the world's most experienced alpine sport climbers, Nina Caprez from Switzerland and Barbara Zangerl from Austria, have made a remarkable redpoint of Die Unendliche Geschichte, Beat Kammerlander’s technical masterpiece up the 7th Kirchlispitze in Switzerland’s Rätikon massif. Established ground-up in 1990 and freed the following year, the "never ending story" had to wait a staggering 14 years for its first repeat at the hands of Italy’s Pietro dal Prà. And while its younger neighbour Silbergeier (put up by Kammerlander in 1993) received all the attention from the world's elite, from 2005 onwards Die Unendliche Geschichte has laid dormant, neglected almost, silently awaiting another ascent…

This summer Nina Caprez and Barbara Zangerl have been on a role after their July repeats, respectively, of Hannibals Alptraum on the nearby 4th Kirchlispitze and Bellavista at the Tre Cime di Lavaredo in the Dolomites. It was only natural therefore that at the end of August the two decided to join forces once again. The duo had often climbed together in the past - they had checked out Silbergeier as a team and their joint ascent only failed to come to fruition due to Zangerl’s back injury - and this summer the time was finally ripe to test their technique and mettle on Die Unendliche Geschichte. high up on the smooth limestone face both these attributes would most certainly be needed: the route boasts max difficulties up to 8b+, with 7c+ obligatory run-out climbing, leading Kammerlander to state that Unendliche Geschichte is more demanding both physically and psychologically than his younger Silbergeier.

After Dal Prà's 2005 ascent cobwebs had grown over the route... without the benefit of tick marks and in-situ quickdraws to guide the way, Caprez and Zangerl started to decipher the 12-pitch line. This proved tough, so tough indeed that 3 days were needed just to unravel the first 3 meters on the second-hardest pitch, graded 8b. "The thing with this route" Zangerl told planetmountain.com "is that unlike the much steeper Silbergeier, there are no obvious holds. You’ve just got to hope that your feet stay put and you don’t fall off. On some of the moves you’ve got like a 50-50 chance of staying on." It wasn’t just the technical crux that would prove taxing though, as Zangerl explains "If you look at the topo you think, hey 6b, that’s easy, 7a, that shouldn’t be too bad. But then when you’re up there nothing comes easy at all, especially with those run-outs on some of the easier pitches."

Initially the route felt impossible and progress was slow, but the two persevered and then, after 10 days of work, everything suddenly slipped into place and the route was redpointed twice in rapid succession, on 8 and 9 September.

While these repeats could be neatly archived under the fashionable "first female ascent" label, that would be overlooking the importance of what are, in effect, only the second and third repeats of this 25-year-old route. Regardless of gender. And bearing this in mind, it’s worth hearing what Caprez has to say about this issue: "In my eyes there is no difference between girls and boys, especially on vertical and technical faces like the ones in Rätikon. There is only one difference that matters and it's between the first ascent and all that follow. Redpointers are always in the privileged position, they already know that the route is possible to climb."