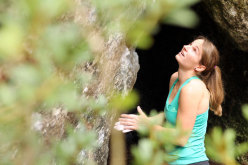 On 5/09/2013 Barbara Zangerl repeated, climbing together with Jacopo Larcher, Des Kaisers neue Kleider (240m, 8b+) on Wilder Kaiser in Austria.

In many respects this 240m 8b+ captured the imagination of many, also because when combined with the famous Silbergeier put up by Beat Kammerlander and Thomas Huber's End of silence, it formed the so-called "Trilogy of the Alps", ie three extraordinary alpine testpieces created by three climbers who managed to transform their extraordinary ability from the low lying crags to the high alpine faces. A "trilogy" which is perhaps a bit limited, which doesn't take into account many other beautiful and difficult routes, but which certainly indicated what was being done back in 1994.

Those who have repeated all three routes include illustrious climbers such as Stefan Glowacz in 2001 and unforgettable Harald Berger in 2005. Now it's Zangerl who is the first woman to make the hat trick after having repeated Silbergeier in July and End of Silence last summer.

To get to grips with Des Kaisers neue Kleider Zangerl chose an excellent climbing partner, Italy's Jacopo Larcher and before the redpoint she obviously worked the pitches. 15 days in total, including the use of fixed ropes, were needed to understand the secrets of "the Emperor's new clothes". Last Thursday the time was right, perfect even seeing that she redpointed all pitches first go up to pitch 8. Which means 7a, 7c, 8b, 7b+, 8b+, 8a and 6b straight off (and obviously as the leader)... It seemed like the perfect day, but then Zangerl ground to a halt on the top crux, the second 8b+. "I needed seven attempts to free that pitch" Zangerl told Planetmountain "yeah, I began to become a bit nervous..." The Austrian however isn't one who gives up without a fight and she finally freed it to then climb the last pitch, a far easier 6c.

So Barbara Zangerl is now the first woman to have not only repeated Des Kaisers neue Kleider, but also to have become the first woman to complete this famous trilogy. It's worth noting that the Glowacz route is renowned for it's long run-outs. But in answer to out question about how it felt, Zangerl replied "Afraid? No, I was far less scared than on Silbergeier or End Of Silence..."