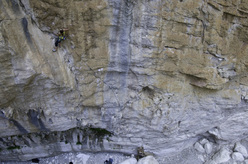 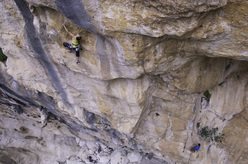 The video of Barbara Zangerl climbing Hotel Supramonte (400m, 8b) at the Gola di Gorroppu, Sardinia.

Barbara Zangerl is perhaps better known for her indisputable bouldering skills - read the first female ascent of an 8A+/8B boulder problem, Pura Vida, at Magic Wood in 2008 - but in 2011 she concentrated more on rope climbing at the crag and in the moutnains and succeeded not only in sending her first 8c, Erntezeit close to Bludenz in Austria, but also in a rare female ascent of the famous Hotel Supramonte 8b in Sardinia.

Established ground-up in 1998 by Rolando Larcher and Roberto Vigiani and freed by Pietro dal Prà in 2000, Hotel Supramonte received its first female ascent by Slovenian climber Martina Cufar in 2004. Zangerl sent the 400m multi-pitch this April together with fellow Austrian Marco Köb after having the worked the line for three days. A month later the "Hotel" was also repeated by Swiss climber Nina Caprez.