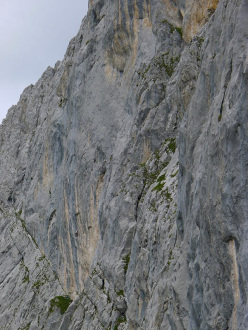 20 years after the first free ascent, Silbergeier continues to fuel dreams. The climb that more than most has come to represent highest technical and psychological difficulties, established ground-up by Beat Kammerlander on the IV Kirchlispitze in the Rätikon massif, was repeated yesterday by Austria's Barbara Zangerl. In doing so the Austrian has become the second woman to repeat this route, after Nina Caprez in 2011.

Zangerl repeated the route together with Tobias Bitschnau and she told Planetmountain "This repeat means a lot to me, above all because when I tried it two years ago I was forced to abandon it because of injury. Yesterday, together with Tobias, I led all the pitches and sent them straight off, without falling. But at times I got really frightened by the long run-outs... I'm really happy, a dream come true that began two years ago with 4 days of attempts. Plus another 7 this year for what is a truly fantastic route! Respect to Beat for this great climb!"

It's worth noting that Zangerl, renowned above all as a boulderer, has slowly but surely been making a name for herself for her har dmulti-pitch repeats, such as End of Silence on the Feuerhorn, Delicatessen in Corsica and Hotel Supramonte in Sardinia.