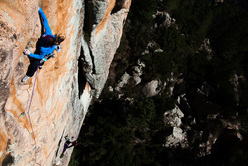 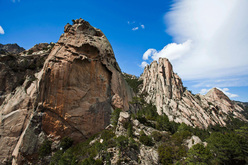 Corsica climbs for Zangerl and Bodet

In Corsica's Bavella Barbara Zangerl has repeated Delicatessen (8b, 120m), while Stéphanie Bodet has repeated Octogénèse (8a+, 300m).

After Nina Caprez last year, it's now Barbara Zangerl who has repeated Delicatessen, the famous route established by the Frenchmen Arnaud Petit and Stéphane Husson in 1992 on Punta d'u Corbu at Col de la Bavella in Corsica.

The Austrian - who last year made short work of Hotel Supramonte in Sardinia - repeated the 120m line at the end of April after three days of attempts thwarted by difficult weather conditions, long spells of rain and very high winds. But then, during the only day of sunny weather, Zangerl pulled off the redpoint: after a quick "warm-up" on the first pitch - graded 8b - Zangerl then led all pitches without falling. This climb was an absolute highlight for me! One of the most beautiful routes - ever!"

While talking about Corsica and routes established by Arnaud Petit, it's worth noting that at the start of April his partner Stéphanie Bodet repeated Octogénèse, another difficult multi-pitch on the nearby Teghie Lisce. With difficulties up to 8a+, this 300m line was put up in 1991 and then freed by Petit in 1997.