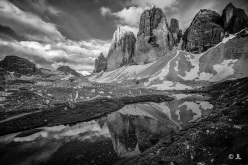 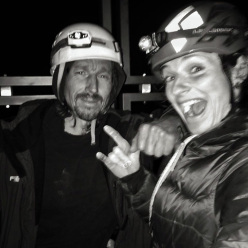 Barbara Zangerl and Christian Winklmair on the summit of Cima Ovest di Lavaredo, Dolomites, after having repeated Bellavista
Photo by Barbara Zangerl

Five years after her first multi-pitch experience - belaying, seconding and jumaring up behind Hansjörg Auer on Pan Aroma - Barbara Zangerl has now returned to the Cima Ovest di Lavaredo in the Italian Dolomites to repeat nearby Bellavista, the route put up in 1999, solo and in winter, by Alexander Huber and then freed in 2001 by the German with difficulties up to 8c. Despite its difficulties, both physical and psychological, over time this has transformed into an important testpiece and in 2013 Sasha DiGiulian made the route’s first female ascent together with Edu Marin.

Since 2010 Zangerl’s progression from hard bouldering to multi-pitches has been impressive to say the least and during the last five years she has amassed a long list of difficult climbs that include, amongst others, Des Kaisers neue Kleider (Wilder Kaiser, Austria) Silbergeier (Rätikon, Switzerland), End of silence (Feuerhorn, Germany), Delicatessen (Corsica) and Hotel Supramonte (Sardinia).

Between last summer and this summer the Austrian spent about 15 days working Bellavista prior to her successful ascent two days ago. Believing that Sunday, just like Saturday, would be another "working day" she and Christian Winklmair set off late, just 10:00 am, with Zangerl leading all the pitches. At the roof Winklmair took over to remove someone else's fixed rope and then lowered back to the stance, then Zangerl continued leading all the way to the ledge at half-height which they reached at 7 in the evening. Up to this point Zangerl had not fallen and so the two decided to proceed into - for them - unknown terrain along the Cassin route, with which Bellavista shares the upper section. Swinging leads they continued up the and as night fell they switched on their headlamps. The last nine pitches were climbed in the dark - a somewhat slow and nerve wracking experience Zangerl admits - and the summit was reached at 2 am. The descent from the cross proved "adventurous" and they returned to their car at 5:00am before making the 4 hour drive back home to Austria, just in time for work…

After repeating Bellavista Zangerl told Planetmountain "Climbing this route proved a real mental battle, some of the pitches are dangerous and you really mustn’t take a fall. I’m not entirely sure about the grade, perhaps it’s more like 8b+ instead of 8c. But regardless, it’s certainly the wildest thing I’ve ever climbed!"