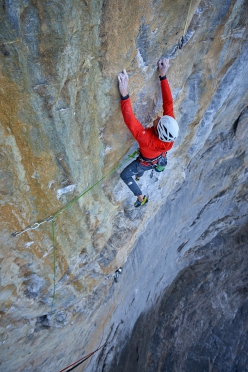 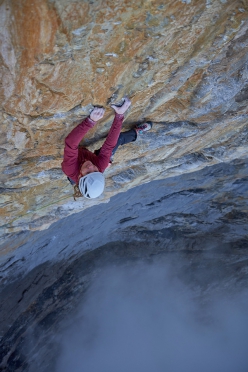 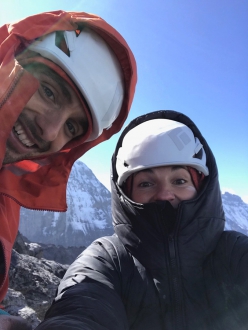 Climbing ground-up and in a single push, Barbara Zangerl and Jacopo Larcher have repeated Odyssee, the difficult alpine outing up the Eiger completed in 2015 by Roger Schaeli, Robert Jasper and Simon Gietl.

After their impressive double Eiger debut only a few days ago, Barbara Zangerl and Jacopo Larcher have now made a four-day free ascent of Odyssee. The route in question was established initially by Roger Schaeli and Robert Jasper and then completed with Simon Gietl in 2015 with difficulties up to 8a+.

Zangerl and Larcher made best use of the short time they had off between work commitments and despite far from ideal weather conditions, pulled off the 1400m ascent in their usual style: all free, swinging leads on the easier pitches and both leading all the harder pitches.

On the first day they reached the crux pitch. After sending this they rappelled to the base of the pitch and spent the night on the portaledge, while on day two they climbed up to the “second Czech bivy”. Once again they climbed the pitch above, then returned to the busy and they next day continued upwards to the last 8a pitch. After a third night on the portal edge they sent the 8a and the final pitches, then abseiled back down to the base of the mountain. It’s worth underlining that the duo sent the 33 pitches ground-up, in a single push without ever returning to the base.

Writing to planetmountain.com while waiting for his gear to dry out, Larcher explained "we didn’t climb everything onsight, but sent some pitches second go. The weather was a bit of a problem… it was really unstable and it stormed at least once a day. Two 7c pitches were completely wet and we really had to fight to send them. The route is really beautiful, we’d like to congratulate the first ascentionists. I seriously didn’t think the route would be that overhanging…"

It was always a big dream to climb a route on the famous Eiger northface. But it is not easy to find a perfect weather window with good conditions for the long routes. So it can turn out to be a real serious adventure. Exactly how it felt to free climb all 33pitches to the top of “Odyssee”. Unforgettable experience. Some wet pitches scared us like hell and we were close to give up on some points. At the end the whole adventure went out pretty lucky and we completed a “all free” ascent in 4 days for both of us. Super happy!!! High five for @rogerschaeli @robertjasperextremeclimber and @gietlsimon for this amazing route they put up and “team-freeclimbed” in 2015 as the hardest route on the Eiger. #tired #liveclimbrepeat #bdofficeibksingleledgeadventure Big thanks for @paolosartophoto for joining us and taking some stunning pics.

18.09.2009
Eiger North Face, Japanese Diretissima freed by Jasper and Schäli
Robert Jasper from Germany and Roger Schäli from Switzerland have made the first free ascent of the famous "Japanese Diretissima" on the North Face of Eiger. The route now goes free at 8a and is a very serious alpine undertaking indeed.

25.06.2009
Stephan Siegrist frees Magic Mushroom on the Eiger North Face
Swiss climber Stephan Siegrist has made the first successful redpoint ascent of "Magic Mushroom" up the North Face of the Eiger. The route had been established in 2007 by Roger Schäli and Christoph Hainz and leads up the 3219 metres high mushroom in 21 pitches and now goes free at 7c+.
19.09.2003
Papert and Lochner repeat Symphonie de Liberté
On 12.08.03 the Germans Ines Papert and Hans Lochner carried out the first one-day redpoint of one of the hardest routes on the Eiger, Symphonie de Liberté