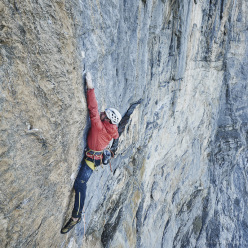 Roger Schäli climbing the 8a+ crux pitch of Odyssee on the North Face of the Eiger, forged together with Robert Jasper and Simon Gietl
Photo by Frank Kretschmann / http://www.funst.de 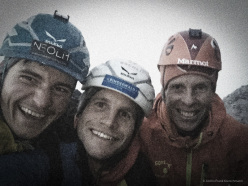 Simon Gietl, Roger Schaeli and Robert Jasper on the summit of their new route Odyssee (8a+, 1400m) on the Eiger North Face on 11/08/2015
Photo by Frank Kretschmann / http://www.funst.de 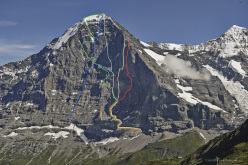 An international trio comprised of Roger Schäli (Switzerland), Robert Jasper (Germany) and Simon Gietl (Italy) have established Odyssee (8a+, 1400m), a difficult and serious new rock climb up the North Face of the Eiger in Switzerland.

One of the most famous walls in the Alps, the notoriously cold and inhospitable North Face of the Eiger, has been enriched with a demanding new route at the hands of Roger Schäli, Robert Jasper and Simon Gietl who this August managed to make the first free ascent of Odyssee, a 1400m line they had been working on since 2009.

The new route takes a line up the "steepest and most challenging part" of the North Face, namely the overhanging Rote Fluh and Czech pillar to the right of the classic 1938 Heckmair route. The aptly named Odyssee was scoped by Schäli and Jasper back in 2009 after their first free ascent of the Japanese Diretissima and although in the ensuing summers they concentrated their efforts on freeing existing routes (eg. John Harlin Direttissima with Heckmair Exit in 2010 and Piola - Ghilini Direttissima in 2013) they nevertheless found the time to start work on what would later become their Odyssee.

After following the Heckmair route to reach the famous Stollenloch, Schäli and Jasper explored a fairly direct line that crosses in various parts La Vida es Silbar (7c, 900m, Daniel Anker, Stephan Siegrist, 1999) and Paciencia (8a, Stephan Siegrist, Ueli Steck). Between 2009 and 2013 Schäli and Jasper climbed ground-up, past "surprisingly compact and good limestone", using a mix of trad gear, pegs and bolts to protect the route. But although they had already tackled difficulties up to 8a+, occasionally past some rather exposed sections, progress was slowed down by the cold, terrible weather conditions. They had only forged 2/3 of the route and the journey upwards was becoming longer and more tortuous than expected.

Summer 2015 was to be the turning point though thanks to the addition of two key elements: stable weather and the addition of young South Tyrolean alpinist Simon Gietl. While the entire Alps were sweltering away in what has been defined as the warmest and driest summer of the last 150 years, Schäli and Jasper were joined by Geitl who with unbridled enthusiasm helped the duo complete the route.

"Simon was like a breath of fresh air to us" explained Jasper "and we became a strong and fast moving team. Together we pushed forward our first ascent and at the same time we also free climbed all pitches. For almost two months we lived in the shadow of the cold North Face and took everything  chance we were given." The team managed to repoint all individual pitches and topped out at 3700m on 11 August 2015. "It was an indescribable moment when we reached the top in the midst of fog and darkness. Our climb through this even for us incredible huge face, our Odyssee, had come to a good end!"

At 8a+, Odyssee now checks in as the hardest rock climb on the North Face of the Eiger, half a grade harder than Paciencia, established by Stephan Siegrist and Ueli Steck in 2003, freed by Steck in 2008 and, for the record, repeated this summer by Roger Schäli & Mich Kemeter as well as by Scotland’s Robbie Phillips & Willis Morris. While waiting for grade confirmation of Odyssee, what remains to be done now is obviously the first free, single push ascent. But this will most certainly be another chapter that joins the epic Eiger North Face saga.