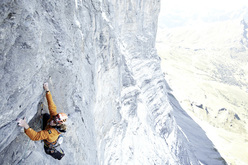 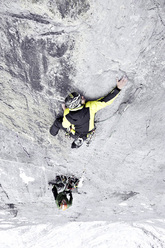 Roger Schäli during the first ascent of the "Japanese Diretissima" on the North Face of Eiger.
Photo by Frank Kretschmann 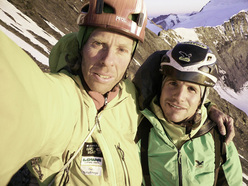 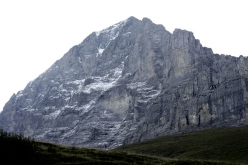 Robert Jasper from Germany and Roger Schäli from Switzerland have made the first free ascent of the famous "Japanese Diretissima" on the North Face of Eiger. The route now goes free at 8a and is a very serious alpine undertaking indeed.

A six year old project was finally completed at the end of August when pro climbers Robert Jasper and Roger Schäli managed to redpoint the Japanese route up the 1800m high North Face of the Eiger. Climbed exactly 40 years ago by a Japanese team and originally graded VI, A2, the route forces a direct line up through the "Difficult Crack" and steep 200m high "Rote Fluh", with the help of 250 6mm bolts and 2400m of ropes.

After some impressive first ascents in Norway last winter, Jasper and Schäli joined forces once again to solve the riddle and after a couple of attempts, thwarted by rockfall, bad weather conditions and the poor condition of the 40 year old rusty bolts, they finally managed to free the line in a two day push at the end of August. Jasper, who in 2006 made the first free ascent of Yeti 7c/7c+ on the same North Face, made an extremely exciting discovery right beneath the summit... he takes over the story from here.


Japanese Diretissima by Robert Jasper
28 August 2009. About half of the holds of the "Rote Fluh" are wet. We climb and fight ourselves forward. Two of the most difficult pitches are also partly wet and we need several tries to freeclimb them. With wet and icy fingers I hold one tiny edge after the next, my tight climbing shoes constantly slipping because of numb toes. Blindly I move through the moves I'd rehearsed, with hardly any feeling in my limbs.

It is mere willpower that keeps pushing me forward, revealing yet unknown power recourses. On the third try, I finally - barely - get through the crux pitch. We can make it! The following morning we are greeted with bad weather conditions and spend the day waiting in our little tent at the "Stollenloch". The air pressure rises in the afternoon and as forecasted the weather changes for good during the night. This is our chance.

On the 30th of August we set off in the middle of the night, following the light of our headlamps. We quickly make our way through the second icefield which is mere black ice with scree and move on into the huge and scary headwall. It gets tough now: the "Broken Pillar", loose, crumbling rock everywhere with hardly any chance of placing solid gear and only a few old and rusty pegs left behind by the Japanese Expedition Team, hit by rocks many times.

The whistling sound of falling rock takes our imagination back to the famous stories about the Eiger. Its almost too much of an adventure. Shortly before the Central Band - our third planned bivvy – the rockfall suddenly gets heavier. A fist-size stone hits my helmet and almost cracks it. Luckily it doesn't knock me off my feet and off the wall. Worn out and tired we errect our tent. The rockfall continues throughout the night and stones almost hit our tent more than once. We try hard to give our stressed nerves a rest. A little food and drink then we crawl into our sleeping bags. Despite the torment we both manage to recover a little for the next day.

Like the last days Roger and myself swap leads continuously and manage to move quickly. On the "Sphinx Pillar" Roger fights like a Samurai - he settles the bill with the aid pitches graded 6, A2. Now climbed free this is a hard 7b. After several alpine pitches and terrible traverses we finally reach the summit Icefield. Here the discovery: an old backpack, frozen solid into the ice and offers us a very welcome belay as we only took two ice-screws with us. In all probability the sack was left behind by Jeff Lowe*.

Greeted by the last rays of evening sunlight we flee the never ending shadow of the Eiger North Face and hug each other full of relief on the summit of the Eiger. It's done.

Description
From the Second Icefield the route is highly exposed to rockfall. In the Rote Fluh the rock quality is good and there are many old bolts, while in the upper section the rock quality is poor and there is little in-situ pro. Pro and belays have to be established throughout, but some stances in the Rote Fluh have been restored with new bolts. Nevertheless this is a very serious alpine undertaking!

* Editor's Note: During a fascinating and gruelling nine day ordeal at the end of February and start of March 1991 American Climber Jeff Lowe soloed a new line up the North Face of the Eiger. After having negotiated extreme difficulties, a helicopter made a daring rescue and plucked him to safety off the west ridge, immediately beneath the summit. His 60 pitch route is graded VII, 5.10, A5 and the climb is a testament to Lowe's indisputable talent, skill and determination.