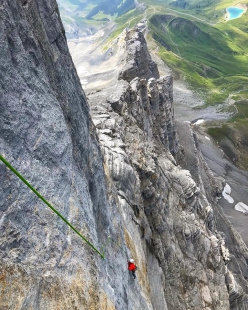 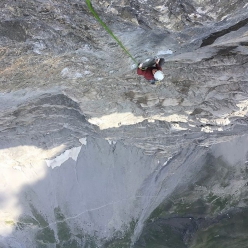 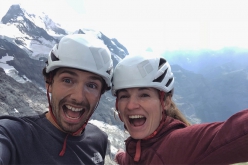 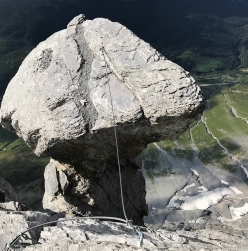 Eiger: the famous mushroom rock formation at the end of the climb Magic Mushroom
Photo by Jacopo Larcher, Barbara Zangerl

On the North Face of the Eiger Barbara Zangerl and Jacopo Larcher have repeated Deep Blue Sea and Magic Mushroom. This is the first time on the famous Swiss mountain for the two climbers.

Barbara Zangerl and Jacopo Larcher have celebrated their Eiger debut with a double whammy of two important routes in just two days: Deep Blue Sea and Magic Mushroom. Larcher and Zangerl traveled to the Ogre for the first time a few days ago and, taking advantage of sufficiently stable weather, immediately set about climbing these two alpine undertakings.

Deep Blue Sea was established in August 2000 and 2001 by Bernd Rathmayr and Reto Ruhstaller with difficulties up to 7b+ and in 2008 the 250m route was famously climbed in freebase style - without a rope but with a small parachute - by Dean Potter. Zangerl and Larcher obviously repeated the climb with a rope, swinging leads and climbing everything onsight.

As to Magic Mushroom, this shouldn’t be confused with the El Capitan namesake, repeated by the duo at the end of 2017. The 600m line up the righthand side of the north face of the Eiger was first ascended in 2007 by Christoph Hainz and Roger Schaeli and freed two years later by Stephan Siegrist, Thomas Theurillat and Ralph Weber with difficulties up to 7c+. The day after climbing Deep Blue Sea, Zangerl and Larcher swung leads and both made a single-day free ascent of Magic Mushroom, requiring a couple of attempts to free the hardest three pitches.

Yesterday evening the two returned to the base of the mountain, destination unknown for their third Eiger escapade.

On our second day on the Eiger we decided to climb "Magic Mushroom" (yes, we like to repeat routes with this name ). The weather was still too unstable for spending more days on the wall, so we opted for a one-day route. We started early to climb this 20+ pitches beautiful route, which ends exactly on the famous base jumpers exit (the mushroom ); we were happy to stand on the top before the storm arrived and after having both free climbed it. Big up to @rogerschaeli and @christoph_hainz for putting up this really nice steep alpine sport climb on perfect rock: everybody should go and give it a try And now, how will day 3 looks like? Any suggestions? • @thenorthface @blackdiamond @lasportivagram @frictionlabs @vertical.life.climbing

25.06.2009
Stephan Siegrist frees Magic Mushroom on the Eiger North Face
Swiss climber Stephan Siegrist has made the first successful redpoint ascent of "Magic Mushroom" up the North Face of the Eiger. The route had been established in 2007 by Roger Schäli and Christoph Hainz and leads up the 3219 metres high mushroom in 21 pitches and now goes free at 7c+.