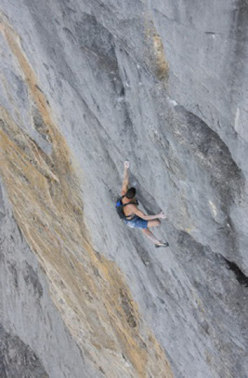 Dean Potter during the first FreeBASE of Deep Blue Sea on the Eiger (5.12+/7b+)
Photo by Beat Kammerlander

Dean Potter: FreeBASE on the Eiger

On 6/08 American climber Dean Potter carried out the first FreeBASE ascent of Deep Blue Sea (Eiger, 5.12+/7b+), climbing without a rope but with a B.A.S.E. parachute.

Solo up Deep Blue Sea, the 300m route which with difficulties up to 5.12+/7b+ takes a steep line up the NW arête of the Eiger, first climbed in 2001 by Rathmaier and Ruhstaller. The solo was carried out on 6 August by 36 year old Dean Potter who chose to climb with a B.A.S.E. parachute only.

A parachute instead of a rope... the "secret" dream of all climbers finally materialised? In some respects yes, seeing that Potter started his solo after traversing in along a ledge as he would have been unable to open the parachute safely should he have fallen on the easier angled lower section.

Potter is better known for his cutting-edge solos in Yosemite but he obviously enjoys spending part of his time BASE jumping. Is his first FreeBASE on the Eiger another sign concerning that search for freedom which combines various extreme sports? Is this a signal for the future?

Although it seems too early to say, we feel this to be unlikely. First and foremost because of the difficulties of it all. Potter's ascent seems another attempt to search for a different way of fleeing from a possible climbing dead-end. In some respects it almost seems a variation of deep water soloing, with the dive into the water being substituted by a sky dive, with parachute of course.

Potter's "game" is definitely difficult to comprehend, above all by traditional mountaineering and climbing standards. The ascent probably interprets that desire to "surf" between different disciplines to combine all the different emotions possible.

In the meantime the ascent, filmed by Jim Hurst and photographed by Beat Kammerlander, will be screened on NBC next October.