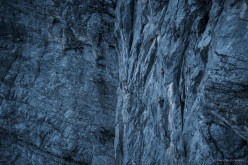 The video of Sasha DiGiulian and Carlo Traversi repeating the rock climb Magic Mushroom up the North Face of the Eiger, Switzerland.

This summer the Americans Sasha DiGiulian and Carlo Traversi repeated Magic Mushroom, the 600m climb established by Christoph Hainz and Roger Schaeli up the righthand side of the North Face of the Eiger in 2007, freed two years later by Stephan Siegrist, Thomas Theurillat and Ralph Weber with difficulties up to 7c+.

The American ascent, carried out as a team over three days, arrived after having attempted the more difficult Paciencia (8a, 900m, Stefan Siegrist, Ueli Steck, 2008) and while a redpoint of Magic Mushroom isn’t the hardest climb in the Alps - described as such by some media, above all American - repeating any route up the North Face of the Eiger is always a demanding and an important undertaking.