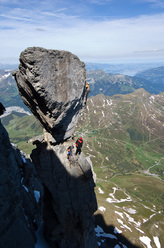 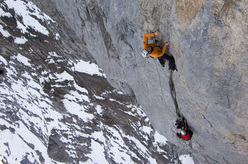 Swiss climber Stephan Siegrist has made the first successful redpoint ascent of "Magic Mushroom" up the North Face of the Eiger. The route had been established in 2007 by Roger Schäli and Christoph Hainz and leads up the 3219 metres high mushroom in 21 pitches and now goes free at 7c+.

Last Saturday the 37 year old from Interlaken tied in to the route together with Ralph Weber and Thomas Theurillat and after a night spent in the portaledge managed to reach the summit of the characteristic mushroom and free the entire route.

An interesting detail: on the summit he exchanged his harness for a parachute and BASE jumped back down to valley. This form of extremely dangerous descent seems to be increasing taking hold of the mountaineering elite: Dean Potter in Patagonia, Thomas Huber from the Tre Cime di Lavaredo and Leo Houlding from the Riglos towers in Spain are just three that spring to mind.

Stephan explains: "The combination of climbing and base jumping on the Eiger was something I had dreamt about for a long time but after the death of my good friend Xavier Bongard in Lauterbrunnen in 1994, base jumping had become a kind of ‘taboo’. I don't really see it as an evolution of alpinism, but I think it's a successful combination of a difficult route on the Eiger (the only one which ends on the mushroom) with a BASE jump - especially since I did it in a clean style, bringing the rig up with me."