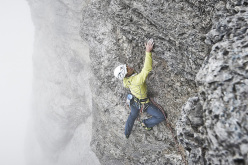 Roger Schäli and Robert Jasper making the first free ascent of Piola - Ghilini Direttissima on the Eiger on 02/08/2013.
Photo by Frank Kretschmann 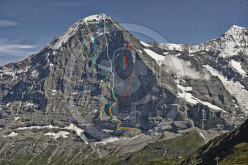 On 2 August Roger Schäli and Robert Jasper made the first free ascent of the Piola - Ghilini Direttissima (1400m, 7c) on the north face of the Eiger.

At the start of August Switzerland's Roger Schäli and Germany's Robert Jasper carried out the first free ascent of the famous Piola - Ghilini Direttissima up the North Face of the Eiger. The 1400m high route takes a direct line up the righthand side of the Rote Fluh and was established from 26 to 30 July 1983 by René Ghilini and Michel Piola. During the five day period the first ascentionists climbed past difficulties estimated at 6b, A4 and over the years the route had grown in reputation due to its steepness and poor rock, so much so that in its 30 year history it has probably not received more than 10 repeats.

In summer 2006 Roger Schäli and Robert Jasper made a rare ascent over 2 1/2 days, and while they almost onsighted the entire line, five pitches were not climbed clean due to an incoming storm.

"After that ascent" Jasper told Planetmountan "we spoke to Piola, the few bolts they had placed were in poor condition and we all agreed it would great to make the route safer for the newer generations. Our aim was to restore the route to its original condition, not renovate it, which in concrete terms meant replacing bolts and not adding anything new. I think this is a really important concept and we've really got to respecting the style of a first ascent."

With this in mind Schäli and Jasper invested considerable time in the summers of 2009 and 2010 replacing the original bolts. "It was really worth the effort. I've always considered the Piola - Ghilini Direttissima one of the biggest routes in the Alps, both in terms of length and importance, and it had gained a reputation due to its loose rock and poor pro" Jasper explained, adding "despite our restoration it's still a ernest undertaking. We've climbed on the Eiger so much we've become used to friable terrain, but having said that every pitch requires total concentration, even the easier ones in the 5c/6a region, they're no less demanding and you certainly shouldn't take a fall."

This summer the time had finally come to free the line in a single push. "We knew we'd be able to free it over two days" stated Jasper "but we weren't certain whether we could do it in a single day. That was the big challenge. You know, 1400m is a long way to go, especially if you need to climb so carefully". Schäli and Jasper set off early in the morning on 2 August and at 6 pm, after 14 hours of non-stop climbing, they reached the top of the Czech Pillar having both climbed the entire line free. The difficulties are estimated at 7c.