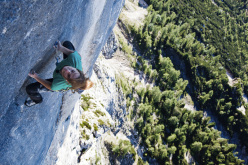 Barbara Zangerl repeats End of Silence on the Feuerhorn

Austrian climber Barbara Zangerl has made the first female ascent of End of silence 8b+, Feuerhorn.

The highly talented boulderer Barbara Zangerl continues to enjoy herself on difficult multi-pitches. After Delicatessen (8b) and Hotel Supramonte (8b, the Austrian now checks in with the first female ascent of End of silence, the 8b+ multi-pitch up the Feuerhorn in the Berchtesgadener Alps. First ascended in 1994 by Thomas Huber, this technical 11 pitch outing had been Zangerl's long-term dream and shed describes this latest redpoint as her "absolute highlight".

Success came about on 1 August together with Emanuel Falch after having abandoned a first attempt due to having taken insufficient trad pro to back-up the bolts, and after having checked out some of the sections by abseil.

Zangerl required a total of nine days for what is still regarded as a reference point for multi-pitch routes in the Alps and which Mauro Bubu Bole, after his 2003 repeat, described as being "certainly one of the top climbs of its genre."