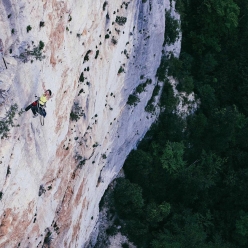 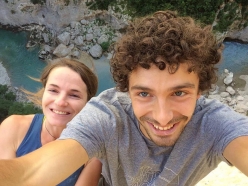 Barbara Zangerl and Jacopo Larcher have climbed Golden Shower (8b+, 150m), the multi-pitch route freed by Stefan Glowacz in 2012 in Verdon Gorge, France. Their ascent took place shortly after that of the Austrians Tobias Bitschnau and Christoph Schranz.

Barbara Zangerl and Jacopo Larcher have both pulled off a rare repeat of Golden Shower, a 150m high sports climb located on the Rivière Gauche, Verdon Gorge, freed by German rock star Stefan Glowacz in 2012. The difficulties of the four pitches - established together with Christian Schlesener following Kurt Albert’s hunch - are 7a+, 8b+, 8b+ and 7c+ and as such this stands as one of the most difficult multi-pitch climbs in the famous Haute-Provence gorge.

Larcher needed three days to get to grips with the line, four days were needed by Zangerl who told planetmountain.com "I thought it was really tough. Two friends - Tobias Bitschnau and Christoph Schranz - had tried the route before us and perhaps made the first and second repeat. All the holds were marked with chalk, and that helped. I failed to send the crux pitch while working the route but nevertheless I decided to give it a go and sent the first two pitches straight off. I then worked the moves of the third 8b+ pitch for an hour, fell off once on my first redpoint go and then sent it. And luckily I sent the final pitch first go, after having toproped it two days earlier when Jacopo onsighted it on his successful redpoint."

Stefan Glowacz climbing Golden Shower in the Verdon Gorge. The video was made for Arco Rock Legends 2012, during which the German climber received the award Climbing Ambassador by Aquafil "for having inspired the climbing world with visions which unite the values of sport with exploration."