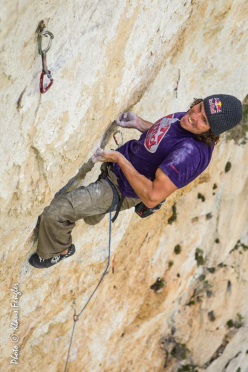 Stefan Glowacz on his route Golden Shower (8b+, 150m) in the Verdon Gorge, France.
Photo by Klaus Fengler

German climber Stefan Glowacz has freed his project, the multi-pitch Golden Shower (8b+, 150m) in the Verdon Gorge, France.

7a+, 8b+, 8b+, 7c+. These are the numbers behind Golden Shower, the route first started eight years ago by Stefan Glowacz and Christian Schlesener after being indicated the line by Kurt Albert in the Gorges du Verdon and which, as we reported this summer, was left to "ripen" for various reasons until this year.

At the Arco Rock Legends Award - during which the German received the Climbing Ambassador by Aquafil Award for “or having inspired the climbing world with visions which unite the values of sport with exploration” - Glowacz talked about that route with a twinkle in his eye, giving away that the Verdon, that face on the Rivière Gauche and that line were something special. Which now evolves into Golden Shower, a route which is “old-school, at times fairly run-out, really nice” as Stefan confirmed to Planetmountain. Glowacz suceeded in freeing all the pitches and, knowing him and when he manages to find the time, he'll return to climb it in a single push. Here's the video created for the award with footage of earlier attemtps.