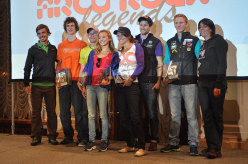 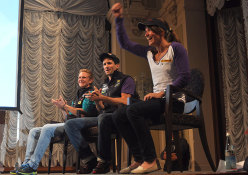 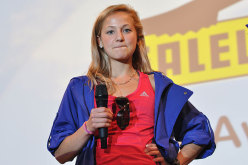 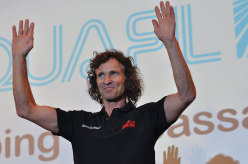 On Friday 31/08/2012 during the VII edition of the Arco Rock Legends Sasha DiGiulian won the Salewa Rock Award, while Anna Stöhr received the La Sportiva Competition Award. Stefan Glowacz was awarded with the Climbing Ambassador by Aquafil prize.

Sasha and Anna. This, for all climbers, is all they need to hear. Sasha DiGiulian comes from Virginia USA. Anna Stöhr from Austria's Tirol. And last night their names were engraved in the Arco Rock Legends Hall of Fame. Sasha, the minute blond climber who during the last 12 months has revolutionised, no, relaunched the limit of female climbing outdoors, received the Salewa Rock Award. And Anna, true dominator of bouldering competitions and probably the world's most important bouldering competition climber, walked away with the La Sportiva Competition Award. Both are, naturally, extremely talented and while 19-year-old Sasha brings with her an air of joyful youth, 24-year-old Anna climbs all boulder problems with her absolute class and unfailing smile.

In some respects it's this female style which won at Arco last night. A style which, in truth though, goes beyond genres yet is reminiscent of 2006, of the first Climbing Oscar edition won by Basque climber Josune Bereziartu and Austria's Angela Eiter. Put in other words, by the first woman to have climbed 9a and the great lead competition queen. And so up on stage last night there were two women once again. Two great women who have already shaped the history of sport climbing. And this too helped in creating this sort of déjà vu during last night's classic and packed evening celebration at the Arco Casinò, hosted by Kay Rush with her usual, impeccable and priceless verve.

Talking of déjà vu. Seeing true climbing legend Stefan Glowacz up on stage proved highly emotional, unexpectedly intense, and the cheers which accompanied him as he took to the stage were indicative of the fact that climbers really do have a heart filled with passion. Glowacz received the Climbing Ambassador by Aquafil prize "for having inspired the climbing world with visions which unite the values of sport with exploration." A quick glance at the 47-year-old's climbing curriculum suffices: after being a champion's champion at the first climbing competitions he played a leading role in the climbing revolution throughout the '80's, before moving on to the world's wildest, most remote big walls. Glowacz is undoubtedly a true climbing legend, a great explorer of our vertical world and the standing ovation he received sealed and confirmed this in an inconfutable manner.

Yes, the atmosphere in the Casinò hall was one of truly special occasions. And so it seemed only right to also award Jenny Lavarda, the strong Italian athlete who has competed at Rock Master a staggering 15 times. In short, last night was a superb, joyful tribute to climbing, filled to the brim with climbing stars. Unsurprisingly all the other La Sportiva Rock Award nominees were true protagonists, too: Kilian Fischhuber, the undisputed King of bouldering, and Jacob Schubert, the dominator of the Lead World Cup 2011. Joining Sasha DiGiulian up on stage for the Salewa Rock Award were two other great sport climbers: Spain's Iker Pou - perhaps he who epitomises most the power and joy of climbing - and Adam Ondra, the climber who despite his young age has already reached legendary status. Representing both the present and future, Ondra's fun show was performed in fluent English and Italian and the audience was visibly enchanted and delighted with its stadium-like cheers. Selecting the two winners was certainly no mean task for the 20 international magazines. Sasha and Anna were the deserved winners, but all could have won. Better still, last night everyone proved a winner. Beginning with that love for climbing and Arco which has always been the focal point of this driving passion. Perhaps this is why, at Arco last night, joy was palpably in the air.

SALEWA ROCK AWARD 2012 NOMINATIONS (in alphabetical order)
Period: from June 2011 to May 2012
Sasha DiGiulian – USA
A truly stellar year for the young American. With two 9a redpoints and an 8b+ on-sight DiGiulian is exploring and setting the current limits of female sport climbing ever upwards.
Dave Graham – USA
After being one of the driving forces behind world bouldering for more than a decade, in this season Graham has found an even more convincing and “devastating” form repeating and establishing hard problems.
Adam Ondra – Czech Republic
Another year headfirst into the future for the two-times winner of this Award, with max results everywhere: 8c+ on-sight on sport climbs, 8C+ boulder (repeat and first ascent) and eight 9a redpoints during the award period.
Iker Pou – Spain
Explosive power. Iker Pou knows a thing or two about this after 15 years at the top of the sport climbing, and climbing game. This genuine athlete shares his positive energy with everyone.
Daniel Woods – USA
Already a candidate in 2007, the American is doubtlessly a world reference point for bouldering. The repeats are simply too many to mention them all, but highlights include the world’s hardest flash of Entlinge 8B+/C and the ascent of Mission Impossible 9a.

CLIMBING ABASSADOR BY AQUAFIL
Stefan Glowacz – Germany
Born in 1965, Stefan Glowacz began climbing aged 15. In 1985 he won at Bardonecchia, the first ever international sport climbing competition and this success was followed by three victories at the legendary Arco Rock Master. After placing second at the World Championship in Innsbruck in 1993 Glowacz said goodbye to the competition circuit but not to climbing and adventures. New horizons on immense walls opened up before him, from the nearby Alps and Sardinia to Greenland. Patagonia and the most remote places on earth. This exploration period continues to date, an intense, satisfying adventure which continues to inspire generations of climbers.