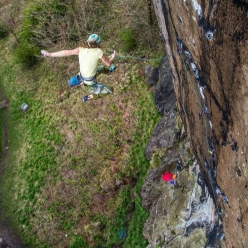 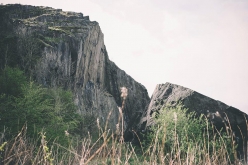 Three days ago Austria’s Barbara Zangerl pulled off a remarkable feat by making the first ever repeat - both male or female - of Achemine, an intense trad climb at Dumbarton Rock established by Dave MacLeod in 2001. Fifteen years ago the route gained the accolade of being the hardest in the country but in the ensuing years it was dwarfed by Rhapsody, another MacLeod masterpiece on the same stone graded E11 and hailed as the hardest trad climb in the world. As such, it enjoyed most of the attention.

Dumbarton Rock is nestled on the outskirts of Glasgow and notwithstanding its initial hostile appearance, it hosts some quality testpieces, weather permitting. Dumbarton Rock has been a reference point ever since the early eighties; in 1983 Dave Cuthbertson made the first ascent of Requiem, a climb that heralded a new era of difficulties worldwide. Despite the passing of time its awesome reputation has remained intact and Zangerl made a fast and necky repeat last Sunday before concentrating on the Achemine crack.

Zangerl attempted Achemine for three days, falling off twice prior to her successful ascent. "I fell off the last move before finishing jug and escaped unharmed" explained Zangerl "so I reckon the route is safe since the protection is bombproof. But the falls are real whippers... "

Asked by planetmountain.com, MacLeod stated "As far as I know it’s the first repeat. Great to hear somebody repeated it after 15 years! I always felt it was a great route. I hope Barbara enjoyed it. The moves are really good - technical and it helps to have good footwork."