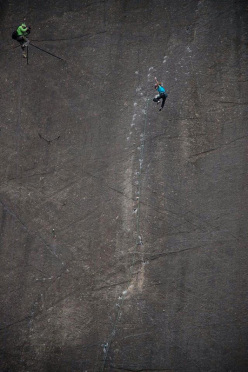 Barbara Zangerl unstoppable! After serving her "apprenticeship" as a boulderer that culminated, in 2008 and at merely 19 years of age, in her reaching the limit of female bouldering with her send of Pura Vida in Magic Wood in Switzerland, the determined Austrian climber decided to turn her attention elsewhere. Inverting everything and directing her power no longer at short intense problems but towards countless moves on long multi-pitch routes up big rock faces. And, in rapid succession, she repeated routes which have come to symbolize a rigorous first ascent ethic coupled with extreme difficulties: Hotel Supramonte in Sardinia, Delicatessen in Corsica, End of Silence up Germany's Feuerhorn, Silbergeier in Switzerland's Rätikon, Des Kaisers neue Kleider on the Wilder Kaiser in Austria. Zangerl's transformation came about thanks to her supreme athletic background and this evolution now boasts another factor: her ability to carefully control mind and fear while executing a difficult trad climb. Yes, because yesterday afternoon she surprised everyone (first and foremost herself) with the first female repeat of Prinzip Hoffnung at the Bürser Platte in Austria. The slab and crack freed in 2009 by Beat Kammerlander and repeated recently by Italy's Jacopo Larcher. While the technical difficulties are estimated somewhere in the region of 8b/8b+, the crack - or rather two cracks - need protecting with tiny wires and during the first 10 meters falling off is strictly prohibited. Needless to say, Zangerl's ascent is of utmost importance and ranks as one of the hardest female trad climbs to date.

Babsi, another super climb!
Yes, thanks. And one which proved nerve-wracking!

Because it was trad and needed protecting with wires?
Yes, but also because I thought I'd send it quickly, but then things turned out differently. I started trying it on toprope at the end of January and the initial sensations were immediately very good. I even got really close to sending it on my first ground-up attempt a couple of weeks ago. But then I started to fall off the same section, again and again...

The one between the two cracks
Yes, along the crux section. The first 20 meters are quite dangerous, up the first 8m I didn't place any gear because the only nuts you can place are so small they probably wouldn't hold a fall. The pro then improves a bit and fortunately there's a good nut that protects you should the 3 nuts at the crux come out. After my first attempts I decided to only place 2 nuts, since placing them costs energy, it requires great body tension on poor footholds and you're never completely fresh when you do the whole sequence. Placing all the gear like I did yesterday is a completely different ball game compared to doing it in toprope.

You caught us off-guard with this trad ascent. Sorry about the question: what trad experience do you have?
Not much. In the past I've done some routes at Indian Creek and I've done some alpine routes, but they've never been this difficult. Let's just say that I took my first falls onto wires on this route.

Which is located at your home crag, right?
Right. It's only a 15 minute walk away and so I often tried it in the evening, after work at the hospital. It's a fantastic place, the slab is located in town, right next to houses. And the line is really beautiful. Truly unique!

You sent it yesterday, after your Spain trip where you redpointed some of your hardest sport climbs to date, such as the 8c Mind Control. Did this help you?
No, I don't think so. At Oliana I also climbed Fish Eye, Full Equip and some other routes but the climbing style is so completely different. Prinzip Hoffnung is a slab, vertical, tiny crimps, very specific moves. And when I came back from Spain they didn't feel good at all.

What happened then?
You know, it's hot now, the slab receives the sun all day and you have to wait for at least an hour while it's in the shade if you want to give yourself a chance to climb it. The best time of year to climb this route is definitely from November to January and I'd begun to give up all hopes of climbing it. Maybe this was the key. Things didn't feel good and so I wasn't stressed out or under pressure, and then all of a sudden I found myself above the crux. A complete surprise!

After which you climbed easily to the top
Not really. It's about 7b to the end of the route but there's a dodgy move, you still need to keep it together, climb precisely, place the gear. Falling off the upper section would have been a real shame and I fought hard all the way to the top!

Just like Beat Kammerlander back in 2009
Yeah, wow, that was some time ago! The nice thing is that while I tried this route, Beat was attempting his new project right next to me. He always climbs hard, simply never gives up. A true legend!