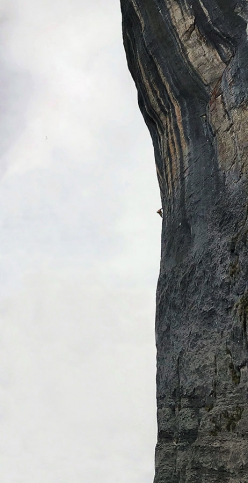 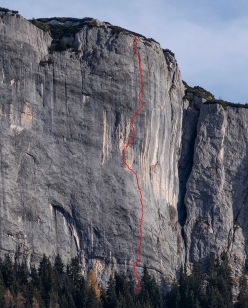 The line of Mauerläufer (200m, 8b+) climbed by Alexander Huber up Waidringer Steinplatte in Austria
Photo by Heinz Zak 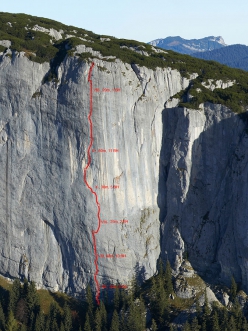 The line of Mauerläufer (200m, 8b+) climbed by Alexander Huber up Waidringer Steinplatte in Austria
Photo by Heinz Zak

Climbing alone and ground-up, last spring German alpinist Alexander Huber made the first ascent of Mauerläufer (200m, 8b+) up Waidringer Steinplatte in Austria.

Last spring Alexander Huber forged a difficult new alpine sports climb up the smooth limestone crag called Steinplatte high above Waidringer in Austria's Tyrol. The route follows an intricate line through the Elefantenbauch sector and is the first route on this wall, according to Huber "for a reason: it's seemingly featureless, no visible weaknesses."

Impressively, the six pitch outing was forged ground-up and rope-solo. The German alpinist split the 200 meter line into 6 pitches, and after 6c, 7a, 6c+, 8a+ it features an 8b+ crux. Huber explained: "After the bouldery start the fifth pitch becomes a real marathon... Fifty meters, seemingly endless as well as almost featureless." The 200 meter route tops out with a somewhat more agreeable 6c and is called Mauerläufer, wallcreeper, taking after the bird that watched Huber's solitary progress during his first ascent.

For over three decades Alexander Huber has been one of the strongest and most complete climbers in the world, his accomplishments spanning the vertical spectrum, from cutting-edge single pitch sports routes to huge big walls and complex climbs at altitude. Standout achievements include the first ascents of Om, a 9a at Triangel freed in 1992 (just one year after Wolfgang Güllich's Action Directe), the 9a Weiße Rose (Schleierwasserfall, 1994) and above all Open Air, the world's first 9a+ located at Schleierwasserfall and freed in 1996. On the big wall front Alex Huber pulled off the first free ascent of legendary Salathé Wall on El Capitan in Yosemite in 1995, and followed this up with El Nino, the über-classic Freerider in 1998 and Zodiac in 2003. He summited Cho Oyo in 1998 but at altitude has always preferred ultra-technical routes, such as his 1996 Latok II West Face line with his brother Thomas, Toni Gutsch and Conrad Anker, and the coveted first free ascent of Eternal Flame up Nameless Tower in Pakistan's Trango Towers massif with Thomas in 2009. He has obviously left his mark in his home mountains, the Alps, with masterpieces such as Bellavista and Panorama (Tre Cime di Lavaredo, Dolomites). Furthermore, he has carried out numerous daring free solos such as Opportunist 8b and Kommunist 8b+ (Schleierwasserfall), Hasse Brandler (Tre Cime di Lavaredo) and the Swiss Route up Grand Capucin, Mont Blanc. Aged 50, he shows absolutely no signs of slowing down.

After the bouldery start the fifth pitch becomes a real marathon... Fifty meters, seemingly endless as well as almost featureless. Exactly how we like it : -) pic: #heinzzak @adidasterrex @petzl_official #climbing_pictures_of_instagram

04.04.2013
Alexander Huber, Sonnwand Nirwana above the Loferer Alm in Austria
In September 2012 Alexander Huber made the first ascent of the multi-pitch Nirwana 8c+ on Sonnwand, Loferer Alm, Austria.