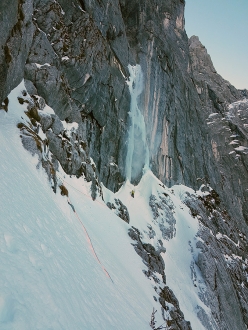 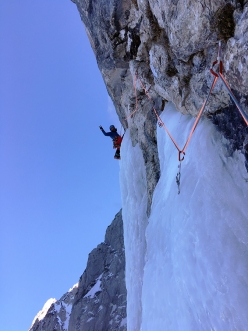 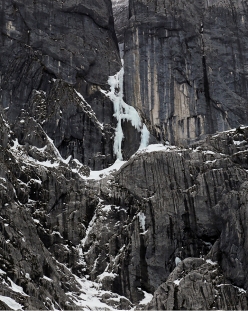 Große Trichter, the grand classic up the West Face of Hoher Göll that straddles the border between Germany and Austria in the Berchtesgaden Alps, has been climbed in winter by the world-class local alpinists Alexander Huber and Guido Unterwurzacher via a line described as "steep, wild and beautiful."

Established in 1922 by Josef Aschauer and J. Kurz, true to its name the "big funnel" is often wet in summer, but this winter conditions proved ideal for what might well be the first winter ascent.

Huber told planetmountain.com "Große Trichter is a classic outing and we followed most of it. We searched for the direct line on the 80 meters that led to the funnel, there where there’s a smooth slab in summer, and a sliver of ice in winter. What we climbed was in all effect a "Direkte Große Trichter", 400 meters split into 7 pitches, past ice up to 90°, while all the rest was climbed unroped.

Guido and I climbed the route on 31/01/2018, a few days after I’d noticed a lot of ice forming in the funnel this year. I reckon it’s a rare occurrence that enough ice forms for the route to be climbed. The section that leads directly to the Trichter offers two pitches of vertical ice with some short sections that are even slightly overhanging. From a technical point of view the climbing is obviously not particularly difficult, simply ‘merely’ vertical ice, but it is never particularly thick, protecting yourself adequately proves interesting. Whether we were the first to climb it in winter I just don’t know. But so far I haven’t heard the opposite."