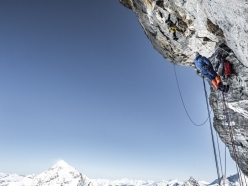 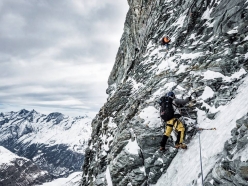 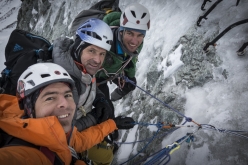 Dani Arnold, Alexander Huber and Thomas Senf making the first ascent of Schweizernase on the North Face of the Matterhorn
Photo by Dani Arnold 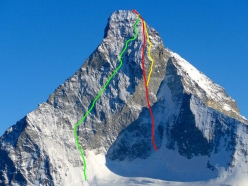 The Matterhorn and the route Schweizernase, first ascended by Alexander Huber, Dani Arnold and Thomas Senf (14-15/03/2017). In green the Schmid route, in yellow the Gogna-Cerruti route
Photo by Alexander Huber

Mountaineering on the Matterhorn: from 15 - 16 March Alexander Huber from Germany and Switzerland’s Dani Arnold and Thomas Senf climbed a new route up the legendary North Face of one of the symbols of the Alps. The new climb is called Schweizernase and shares the start of the Gogna-Cerruti route before continuing directly up through the enormous overhangs on the upper section of the face.

"A while ago I’d noticed a crack up through the Zmutt Nose. Not a short, unimportant variation to other routes, but a direct line through a long, overhanging section of the North Face of the Matterhorn." These are the words of Swiss alpinist Dani Arnold who, together with his fellow countryman Thomas Senf and Germany’s Alexander Huber established a new route over two days towards the end of winter up the famous North Face of this 4478m high mountain.

Marking the most of the stable weather, early on 15 March the trio set off from the Hörnlihütte towards the base of the North Face. Instead of following the Schmid route, up which Arnold had set a speed record in 2015 of just 1 hour and 46 minutes, the trio continued up the Gogna-Cerruti route, first ascended on 14 July 1969 by the Italians Alessandro Gogna and Leo Cerruti. After 12 pitches "where Gogna traversed right" explains Arnold "we wanted to climb directly upwards." After fixing a pitch they bivouacked on a small ledge below the enormous overhangs, and the next morning they launched up into the unknown, described by Huber "as overhanging as the huge roof on Cima Ovest di Lavaredo" in the Dolomites.

"We all knew that the only way to climb through this steep section was by aid climbing. If with ladders, cliff, birdbeaks, pegs, nuts and friends." explained Arnold, adding "just the right terrain for Alexander."

Two hours later Huber managed to breach the huge overhangs and in climbing these two pitches the alpinists added bolts to two belays, and two bolts to the start of the first pitch. Another steep pitch followed and then all of a sudden "we stood on this grandiose nose. There aren’t many places in the Alps as steep and exposed as this one!"

From this point the trio continued upwards for 400m, past classic terrain and five hours later they reached the summit "tired and a bit relieved." The new route is called Schweizernase, Swiss nose, and although it currently has no overall grade, the difficulties in the steepest section are estimated at VII+ and A4.

Arnold concluded "We stood on the summit overjoyed. We were all extremely proud to have been to first to climb such a line through this enormous face, on this world-famous mountain. It showed us once again that, even in 2017, there’s still plenty of room to have an adventure in the mountains…