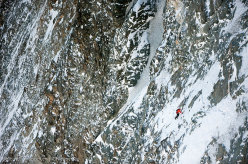 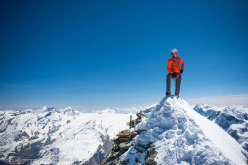 On 22/04/2015 Swiss alpinist Dani Arnold climbed the Schmid route on the North Face of the Matterhorn in 1 hour and 46 minutes, 10 minutes faster than previous record holder Ueli Steck in 2009.

Early on Wednesday 22 April Dani Arnold sped up the classic Schmid route on the North Face of the Matterhorn in an astounding 1 hours and 46 minutes. The 31-year-old Swiss mountaineer crossed the Bergschrund at an altitude of 3400m at 8.34 am and sped up the 1100m route, first climbed by Franz and Toni Schmid between 31 July and 1 August 1931, to top out on the 4478m high summit at 10:20 am. In doing so Arnold beat the previous speed record by 10 minutes, set in 2009 by Ueli Steck who on the upper section had chosen to follow the Pitelka variation via the Hörnligrat.

Arnold is no newcomer to fast solo ascents: in 2011 he sped up the Eiger North Face via the classic Heckmair route in a mere 2 hours 28 minutes, and since then he has made a series of very fast - and equally daring ascents - such as Crack Baby up the Breitwangflue in April last year.

The Matterhorn is particularly dear to Arnold as it was his first 4000m peak when he was 18 years old. According to the mountain guide conditions on his recent ascent were "quite good, although not ideal. On many sections I had to climb sheet ice and on the upper section, which ideally is covered in snow, I had to breach rock."

Arnold had climbed the route on previous occasion with clients and while he did not train specifically for this feat, it coincides nicely with the 150th anniversary of the first ascent of the mountain, carried out on 14 July 1865 by Edward Whymper, Lord Francis Douglas, Reverend Charles Hudson, Douglas Hadow, Michel Croz and the Zermatt mountain guides Peter Taugwalder senior and his son, Peter Taugwalder, junior.