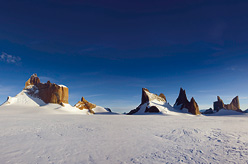 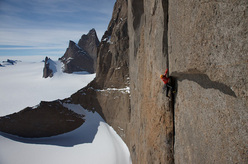 Alexander Huber working his way up the West Face of Holtanna, Antarctic
Photo by Expedition Antarktis 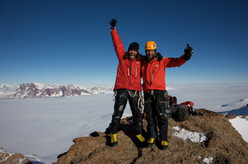 Thomas and Alexander Huber on the summit of "Eiszeit" (VII+, A4, 750m) Holtanna, Antarctic
Photo by Expedition Antarktis 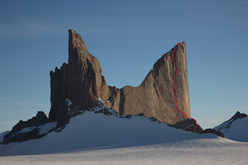 Interview with Alexander Huber who together with his brother Thomas, Stephan Siegrist and Max Riechl carried out three first ascents on Holtanna and Ulvetanna, two relatively unknown, remote and beautiful mountains in the Antarctic.

The Huber brothers, Stephan Siegrist from Switzerland and the photographer Max Riechel have recently returned from what they define as one of their most beautiful expeditions ever. The four spent 6 weeks in Queen Maud Land, Antartic climbing the peaks Ulvetanna and Holtanna which emerge like missiles for almost 3000m out of the perennial icepack. The enchanting beauty literally cast a spell on the mountaineers who boast an expedition experience like few others.

Motivated by photos and stories of a 1994 Norwegian expedition, the four travelled to the Antarctic towards the end of November 2008 with the aim of establishing some new routes and with the hope, obviously, of climbing them free. Shortly after arriving in this white desert however they realised that the incredible cold, which pushed the mercury column at times down to almost -50°C, would put an end to all hopes of climbing a route free.

Not disheartened by any means, the four made the best use of a weather window and climbed "Eiszeit", a new route up the West Face of Holtanna. Their 'ice age', which happens to be the third summit of this 2650m high peak, is in fact the completion of a Spanish attempt six years ago, and now translates into a 750m high big wall, 24 pitches up to UIAA VII and three pitches of aid up to A4. The team needed 3 days to prepare the first half of the route and a further three on the wall. They slept in their portaledges when a slight penumbra indicated that night-time had fallen... at the moment there are 24 hours of daylight in the Antarctic without any division between night and day.

A week later the four climbers reached the summit of Holtanna once again, this time though via the north pillar. Their "Skywalk" (VII-, 450m) starts from the col which separates Holstind from Hotanna and is the first free climb up to the summit. Alexander describes the route as follow "even though the difficulties were fairly moderate, the beauty of the route cannot be outmatched."

As the expedition drew to a close the team received the news they had been hoping for: another good weather window was about to arrive. Moving quickly the German-Swiss expedition needed just two days to climb "Sound of Silence" up the NW Buttress of Ulvetanna to reach the summit at 2931m. Once again they spent a couple of nights on the wall and Alexander commented: "Sound of Silence was the cherry on the cake of what we think is our most beautiful expedition to date. Judged from the outside we might have not been able to realise our goal - a difficult free climb amidst the Antarctica - one hundred per cent, but with an air temperature of -20°Celsius a seven becomes a nine and a nine becomes virtually impossible. And most of the time it was even colder than that! We have tried everything, we have managed everything and we are very happy!"

Given their (truly impressive) expedition experience, their description of the area piqued our curiosity so much that we decided to find out more directly from Alexander himself. For the record: during the same time period a French military expedition comprised of Thomas Faucheur, Lionel, Francois, Didier, Dimitri, Sebastian managed the first ascent of the North Buttress of Holstind, Holtanna's nearby twin summit: "Choundens Renard" 650m, A2/A3. Congratulations to them, too!


Alexander Huber and the Antarctic
Alexander, tell us how the idea to climb in the Antarctic came about.
In 1995 I first saw photos taken by Ivar Tollefsen from Norway, the first person to climb Ulvetanna. I was so struck by the beauty of these mountains that since then I've always dreamt about climbing them.

Three new routes. You couldn't have hoped for more...
All said and done this was one of the most beautiful expeditions in my climbing career. The incredible landscape, the bizarre mountains, the difficulties of the rock face - all these factors render these mountains a dream destination for all mountaineers.

Did you expect this poor rock quality?
The mountains and the rock faces are extremely compact, but the rock itself is incredible fragile. But we were ready for this since the Norwegians had informed us. In principal it is possible to climb only via the cracks, since the faces are too friable. This obviously limits any free climbing possibilities.

What gear did you use?
The West Face of Holtanna had been attempted 6 years ago by a Spanish expedition and they had managed to climb 12 pitches. These included a pitch on the rock face and an offwidth pitch, both protected by bolts. We placed a further nine bolts, mainly on the three aid pitches at about half height. Apart from these three pitches the climbing is characterised by free climbing up cracks which at times transforms into a large chimney protected by camming devices. All belays are equipped for abseil descent.

What does A4 at -20°C feel like?
Aid climbing in intense cold isn't really a problem and doesn't constitute the true difficulties of a route. The real challenge is to climb with as little aid as possible, since this stile means progress on the wall is extremely slow...

Can you imagine that one day someone might free these routes?
On the hard aid pitches of Eiszeit the rock is so friable that you really cannot consider free climbing it. The cracks are so thin that you'd be obliged to use hand and footholds on the wall - I find it hard to imagine that someone might be able to carry out such a feat...

What experience do you bring back home with you from the Antarctic?
The mountains there are fantastic! Ulvetanna, probably the hardest mountain in the Antarctic, is harder than the mountains in Patagonia (Torre Egger, Cerro Torre, Fitz Roy...). Seen from this point of view, these mountains become a prime objective for all alpinists. The route up the west face of Holtanna is perhaps the most impressive route I've ever been able to trace up a world-class mountain. And the best thing of all is that there is no danger of falling rocks, seracs, avalanches... Yes, these mountains are difficult, but they are not dangerous!