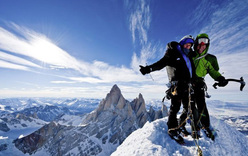 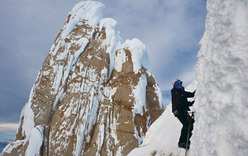 Climbign up towards to the summit
Photo by Thomas Senf visualimpact.ch

An intense three day trip to make best use of the good weather window - completely unexpected - and success was in the bag even before the music had started playing. This is what happened to Swissmen Stephan Siegrist and Dani Arnold and Thomas Senf from Germany who on 3 August found themselves on the summit of Torre Egger after having departed from Switzerland just over a week beforehand.

The three were extremely fast: on 27 July they arrived at El Chalten, on 31 July they deposited the first gear beneath the mountain. The weather forecast wasn't that bad so, they asked themselves, why not give it a bash?

The next morning in perfect conditions - read near total absence of wind - the three climbed up to a bivy located between Torre Egger and Cerro Standhard. Dani Arnold climbed another two pitched prior to nightfall and the intense winter cold.

The climbing the next day was by no means simple - the cracks were iced up and Senf took a long, unexpected fall - and since they failed to find a suitable bivy, they decided to continue climbing.

In worsening weather and after 22 hours on the go they reached the base of the summit ice mushroom. To climb this nightmarish dream they needed daylight and so they dug a step where they sat down and "rested" for four hours.

The first light on 3 August also brought with it cold wind and obvious signs of a brusk change in weather. A fast summit push was imperative and, thanks to his ascent of Titanitc three years previously, Siegrist new about an ice chimney on the South Face. They immediately reached this feature and at midday, after these last three pitches, Siegrist, Arnold and Senf stood on the summit of Torre Egger having carried out the first winter ascent, in perfect alpine stile.

Siegrist is no newcomer to important winter ascent in Patagonia and back in 1999, together with David and Thomas Ulrich and Gregory Crouch he carried out the first winter ascent of the West Face of Cerro Torre. At the time things went completely differently, and the four had to endure 58 days of Patagonian storms prior to success.

This time the winds, described by the locals as "La escoba de dios", were far more tolerant. So much so that 38-year-old Siegrist stated: "We'll need a couple of days to fully comprehend how lucky we've been. We were ready for everything, except that things would work out so quickly." And if their luck holds out, probably there's more in store...